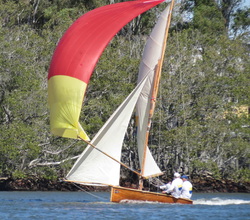 By now the breeze was a steady 10 to 12 knots with some larger gusts when the race got underway with a clean start at 1321. For this heat there were only 7 starters, with 4 withdrawals.  As can be seen by the photo, Bulimba Point was very crowded as nearly all of the fleet headed in there for pressure, even though some puffs were getting towards the top of the number one rig’s range.

Wrecker, Ramona II and Irene-M were the first three skiffs around. A slightly larger than usual gremlin entered the race here in the form of a large barge being pushed by a tug and heading upriver. Most boats were able to avoid mishap, except for Avro, who had an interesting kite set.

This was followed by a change of wind as the barge went behind them which saw them round up, heading the wrong way with the kite on. This was quickly followed by a drop of the kite and a two sail away from the barge in pursuit of the fleet. Under normal circumstances, interference like this would see the heat re-sailed, but as they were not in contention with previous results, they continued without protesting for a re-sail.

Meanwhile, further up the course, Irene-M was at it again with a big save required on the run. Not content with going fast they had to dip their windward rail and do a few untimely rolls before continuing on their merry way.

With Wrecker chasing Irene-M, followed by Ramona II, teamwork came to the fore again. In the middle of the river, when it came time to gybe back, the team on Wrecker pulled off a faultless gybe under pressure and raced into the lead. Irene-M and Ramona II, being cautious, opted to drop their kites, gybe and re-set them. This worked on Irene-M but Ramona II lost their spinnaker halyard which saw them two-sail to the bottom mark.

Also on the spinnaker run, Merle decided they were carrying too many spinnaker pole pieces and decided (somehow) to throw two of them over the side. Fortunately they were appropriately marked and returned onshore.

At the bottom, though, it was Uncle Fred who just sneaked around in front of Wrecker after carrying a flat kite down the shore to the mark. Irene-M was third followed by Ramona II and Merle.

By now there were only 6 skiffs in the race as, again, Jan had fallen prey to a gust on the tricky spinnaker run. Avro was bringing up the rear after “issues” during the gybe left them head to wind with the spinnaker flying wildly behind the main and no jib up.   Jessie was sailing hard, with the three girls on her, to stay in front of him. While no gains were made up to Bulimba Point, from there on to the finish all bets were off.  Quickly it became a matter of do I tack and take a chance, or cover and protect, or am I doing the best now and the game of chess began again. Ramona II with Grant skippering is never going to be left wondering what if, that’s just the way he sails no matter which class it happens to be.

Going through the Point he attacked constantly and eventually forced Uncle Fred into covering him, even though he was coming at him with pace. In the end Ramona II had gone from fourth to second over the line by a margin of 14 seconds. What a great effort! Irene-M was a further 13 seconds behind with Merle 15 seconds back. Wrecker came in fifth with Jessie sixth, in a great result for the girls with their short rig, while Avro came in 2 minutes and 40 seconds behind her.