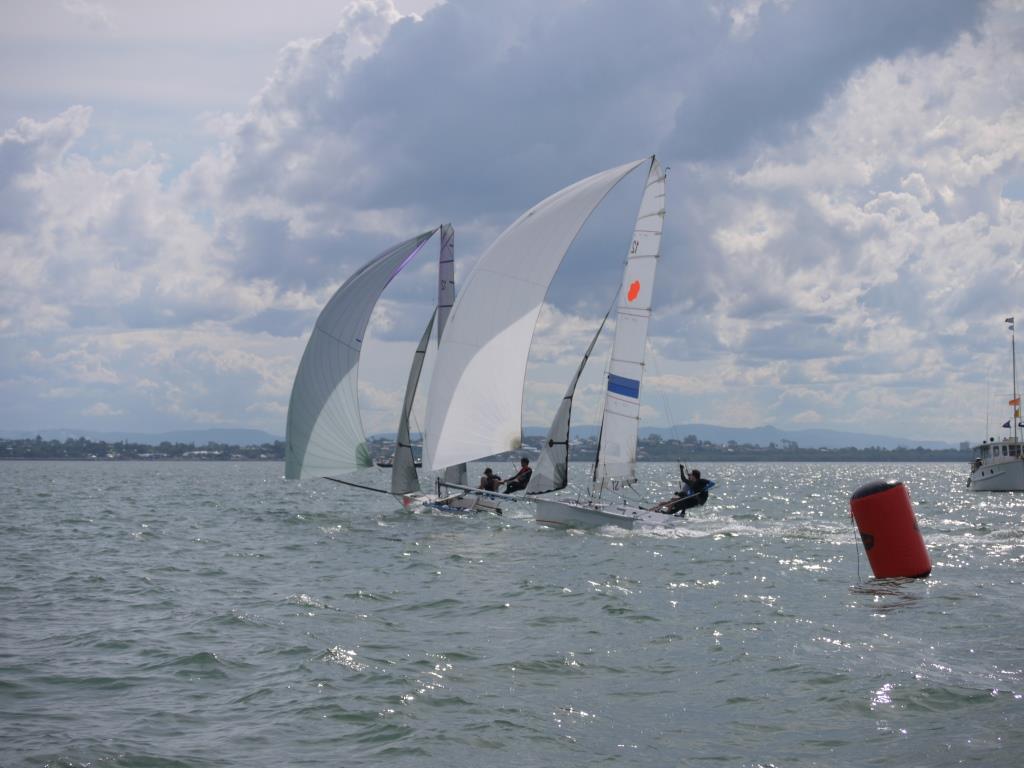 The 2014 edition of the 12ft skiff Australian Championships being held on Waterloo bay in QLD has reached the halfway mark. The racing has been close and the rides non existent.
Day 1 featured an interesting new concept with an invitational sprint race giving competitors a chance to get to know the conditions and blow a few cob webs out. We started in about 8kts of breeze and the one lap dash saw the skiffs all arrive at the top together.. It was a drag race to the finish and Garde took the honours ahead of Lincoln Crown and Local Queenslanders Ghetto Sled.

Race 1 was off and running before we knew it and the steady 8-10kt Noreaster was glorious. Racing was again super close and it was the favourites who led the pack around the track.. Gemmell had a hiccup at a bottom mark and unfortunately for them they prawned their kite on the last lap and went from hero (1st place) to Zero.. The mid fleet saw many epic battles amongst old friends with the sound or Spiesys voice bellowing across the bay bringing both a smile and a chill to everyone on the course especially Nick Bernard (who tried to sneak inside him at the bottom mark). The day was owned by Garde who took the gun followed closely by Lincoln Crown and Vantage.

Day two looked hideous on the forecast so the race committee decided to bring racing forward to a 10am start..!!! For some that hour of the morning was too hard to take so they simply went out on the spectator boat.. (Nick again)
The fickle westerly breeze took every ounce of cunning mixed in with a bit of luck.. The first start was close with some boats heading North towards what looked like a little line of breeze and a couple of boats heading South to a glass out. The Southerly side paid late as there was a nice Southerly puff to follow the glass out and that saw the first rounding being very tight again. Garde lead the drifting fleet down through the gate with a big bunch of skiffs following behind. The Qld association “club boat” was looking quick and were holding 2nd place nicely, but the fleet were quick to suck all her wind and roll her like a sushi train. Lincoln Crown, Gemmell and The Wingman were having a tight tussle down hill for second place but the local boys using their home ground to their advantage up the next work were able to get clear by the top.. The breeze was dying and the race committee shortened course to to finish us at the bottom mark.. Garde had a handy lead but The Wingman had pressure.. Garde held on to the lead to take another bullet with The Wingman coming through fast to take second. Lincoln Crown held off the rest of the pack to take 3rd and we headed ashore for some lunch.

The second race of the day was postponed a couple of hours due to the lack of wind, but the afternoon showed promise with a steady light westerly (yeah that was sarcasm) and we all headed out for race two.. The ride of the day came as we charged out of the marina with kites up.. When we got to the start boat however, the breeze was again light and shifty.. The gun went and the fleet split.. Some went right to a puff and some went left.. It was once again tight up the top but the boys on Garde showed their skill and again lead us all around the course.. The breeze was shifting around a lot but the 12’s made do.. The racing was fickle and the places changed a lot.. All except the Garde boys who managed to stay clear of the fleet.. Up the last beat The Wingman made a move on a big Southerly shift.. They caught up to Garde and sat side by side as the Westerly breeze fought hard against the Southerly.. It was horrible.. Garde managed to ghost around the top in front leaving everyone behind.. The Wingman was next around and then the fleet.. I remember at one stage we had rounded the top mark and popped the kite but were set for a head on collision with Ghetto Sled also with their kite up.. It was pretty tough.. The finish was pretty close with Garde getting the gun, The Wingman close behind and the Hemple Paints (Spiesy) in 3rd.. Spiesy managed to pull a podium from nowhere.. He was further back than full back at the bottom mark the last time but managed to crank it past everyone by sailing well off the course but staying in the breeze.. It was epic and frustrating to watch..

Today the breeze is predicted to be a little bit more predictable and although it’ll be big rigs all around, I feel the competition is just heating up.. BRING IT..!!

Gotta go and rig now.. Send it don’t bend it!