How Good Is This? 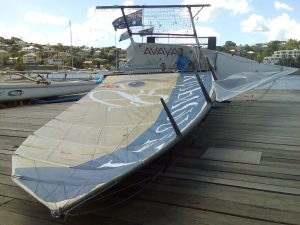 What a fantastic day on the Brisbane River!

The race was the third and final race of the Brisbane River Championship. The course was: Start at the club, Round the Red Lightship at Pinkenba to port, and return to the club. The wind was about 10 to 15 knots out of the south east. We were missing regular Mainsheet hand Simon Hunter for the race so sailed with regular for’ard hand Chris Howell and John Town on the main. The PRO for the day was once again Paul Vivian. Two boats faced the starter. “Clockwork Orange” skippered by Paul Ullman and ourselves on “Fire Truck”.

“Clockwork Orange” just won the start after “Fire Truck” got a bit tangled up with the 125 fleet in the final minute. “Fire Truck” tacked off to the north bank just after the start and got a shift that allowed us to gain the lead at the first cross. We were sailing the boat well on the beat to the Gateway Bridge and pulled out a handy lead on “Clockwork Orange”. Then came the tight reach from the bridge to the red lightship. The breeze was a bit shifty down this leg, but the boys handled it beautifully.

Once around the lightship it was time for the kite. This was a first for Chris and John, but the kite was up very quickly and we were off. The reach was fairly shy and we even had to flog the kite a couple of times to get around wharves, but it was all done with a minimum of fuss.

The run from the bridge was fantastic. After a couple of gybes, we crossed the line about 15 minutes in front of “Clockwork Orange” to take our first win.

Our next race will be the Humpybong Bash out of the Humpybong Yacht Club on the 16th and 17th of Febuary. Please come down for a look and say hello.

13 years ago News and Events

13 years ago Centenary
See All Posts