Heat 1 saw Adam, Nathan and Toby from Sailtech Sails produce the goods on the triangle course with no capsizes with Darryl, Brett and an injured Michael Thornton hot on their heels in Dash Co Building.

Laurie wrestled with his new boat and crew, as did first-timer Matt Ponting and the boys on Firetruck. Both put in a massive effort, but were not able to finish. Queenslander rounded the wrong bottom mark and decided to retire and get a good start on the second race. 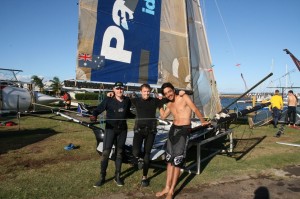 The second race again saw Dash Co Builders and Sailtech battle throughout the whole course in the strengthening sea breeze. Eventually Sailtech made it through to the lead to cross the line ahead of Dash Co, or so they thought … (More on that later)

The battle for the three remaining places was not without its drama. Nearing the top mark for the second of 3 laps, Firetruck capsized on the already swimming Pure Blonde, getting their rigging tangled in the flailing boat’s wing. Queenslander sailed around the mess, however in their excitement at getting ahead of the two stricken boats, they too capsized. The top of the course was a graveyard.

Now Queenslander was on home turf. They knew how to capsize. They had practised it extensively. Within minutes they were powered up and rounding the top mark. A tangled kite, however meant that Pure Blonde caught them on their way to the bottom mark.

Now, here’s where it gets interesting. The two heats had slightly different courses based on the same marks. Heat 1 was two laps of a triangle with a windward finish. Heat 2 was three laps of a windward return with a windward finish and a downwind gate between the start boat and the wing mark from the previous race. Confused? So were we. It was like navigating Vietnam with a drunk Russian throwing buckets of water in your face from the passenger seat.

Sailtech and Pure Blonde went home after only two laps, thinking they had it in the bag. Dash Co sailed another lap, but controversially made an error with one of the gates. With Firetruck retired, this left only one boat – the mighty Queenslander!

Chris, Paul and the newly appointed for’ard hand, Flynn were ecstatic with their effort, considering this was only the second race they have managed to finish this season.

With the trailing three boats all introducing new crewmembers, they naturally spent some time capsized. The race was won and lost in the water as much as on it. “We capsized the hell out of them,” Chris boasted. 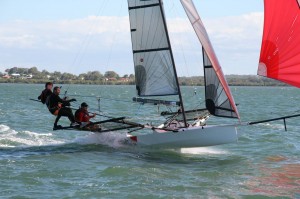 Skipper of Sailtech Adam Young said, “Full credit to the Queenslander fellas. They correctly negotiated the course and never gave up even after falling behind most of the fleet. We thought we had sailed the correct course and, like Dash Co, we sailed ashore thinking we had also won the second heat then to be disqualified like every boat except the Queenslander team, you just have to say well done to them.”

The series goes into the final two heats next Saturday. It’s anyone’s regatta. Sailtech and Queenslander are on equal points for the lead with Dash Co just behind.

Come join us on a spectator boat! Action-packed sailing, guaranteed.

11 years ago Centenary
See All Posts