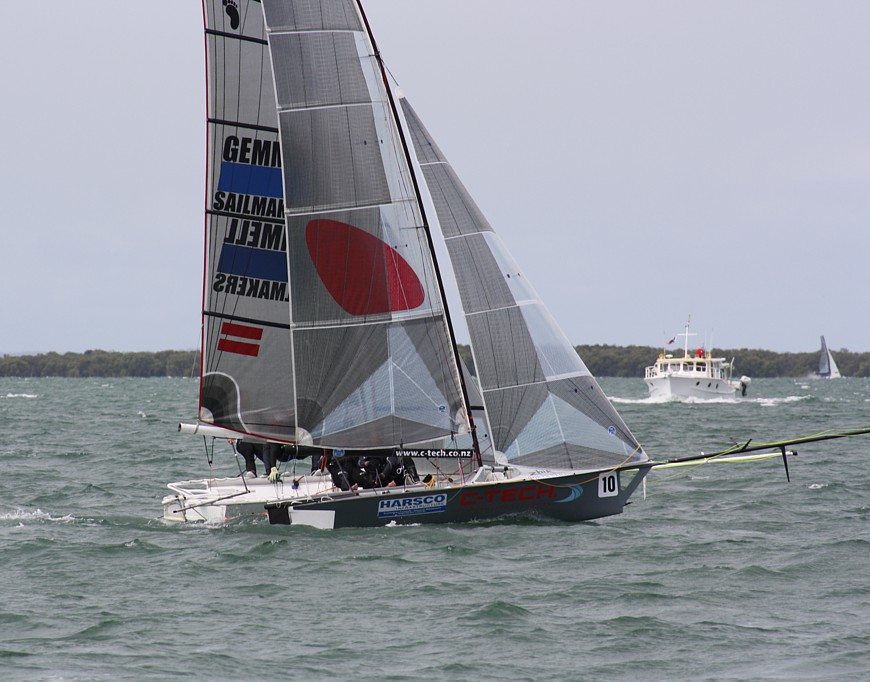 The forecast was ominous with 10-15kts and a few showers..

The start was hot with a light Easterly breeze. Qld locals PB Towage did the ballsy port hand bandit and crossed the fleet..!! The breeze was super fickle and the lead swapped a few times up the first work. There was a rain squall to the South and as it had been doing all morning, it brought the wind.. Thank goodness it did because word has it, the race was about to be shortened or abandoned..!! Those on the starboard side of the course got to it first and came storming in to the top mark.. It was CTech who rounded first followed by the wise men on Vantage.. PB were next and Allwood Sails who missed the start by 6mins were 4th..

Vantage and CTech headed north but as the breeze was filling in quickly PB and Allwood did a gybe set.. The breeze kept filling in and The lead boats were towed well below the bottom mark.. PB dropped the kite first and had a quick 2 sail to the bottom.. They rounded 1st followed closely by Allwood Sails and CTech.. Gemmell Sails were now in the mix and as the breeze was still kicking harder.. Gemmell and CTech went left and PB went up the middle.. The two rivals went toe to toe and had a nice little lead on the fleet by the next top mark.. PB rounded in 3rd and Absolute CnC were now in 4th.. There was a little gap forming now and the breeze was settling in.. Was 2nd the right rig choice for the day..??

The downwind was fast, with Gemmell and CTech locked in a tight dogfight.. PB and CNC were sending it hard to try and catch up, but the two favourites with their 2nd rigs were on a mission.. 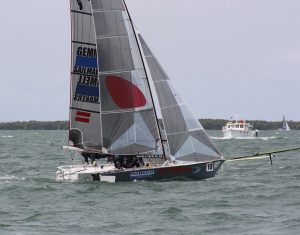 Gemmell and C-tech locked in battle

The 3rd lap saw few changes up the pointy end of the fleet, with the same 4 flying high and praying for the nose to stay out of the water.. The 4th lap had the breeze die a bit, and Garde made their move.. Lumping around big rig all day was taking its toll on PB and CNC and Garde sure made some serious gains..

Gemmell sails took the gun with CTech close behind.. PB were able to cover CNC on the final downwind to the finish 3rd, but 4th was much tighter than Russell would have liked.. Garde threw a big last effort at them with a gybe set at the top mark.. CNC got there in the end, with Garde a few seconds behind them..

What a sensational start to the regatta with a tough rig choice and some sensational rides.!!

Official photos will be at VidPicPro link