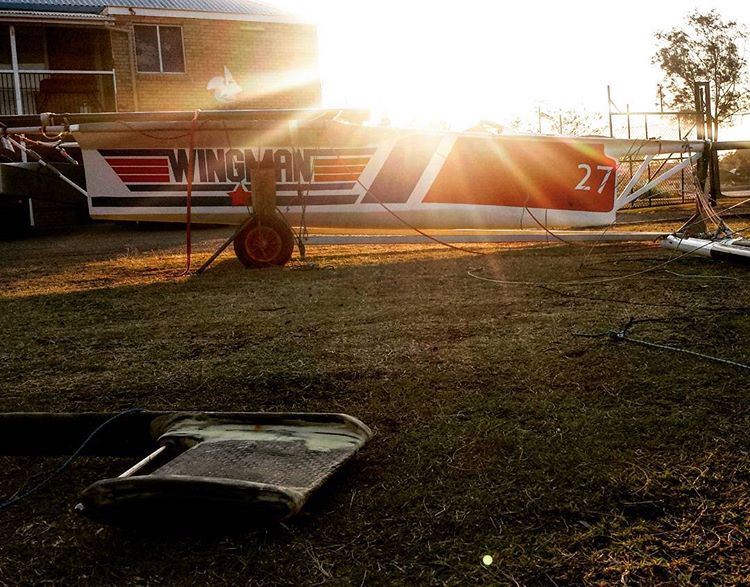 Looking out over the bay at 6am and it was a glass out… Forecast was for ballistic.  Popped down to the local chandlery and spoke to chandelier (you know, the bright spark who work in a Chandlery) they reckoned it was going to go nuklear…  We’ll see 25 knots +/- was the forecast.

Arrive at the beach shortly (15 minutes) before Skinny said he was going to get there… 1.5 hours later and Skinny arrives. We all have a quick chat about which rig.. 4th  (you big blouse) 3rd (it’s the first sail of the season) 3rd with reef (meow) 4th with 3rd kite (all unbalanced) 3rd with 4th kite (what, I’m not putting that chicken shit kite on the boat, meow..).

After sufficient shaming, 3rd rigs all around were chosen.

The Wingman and Giddy Up did plenty of straight line speed trialling, tweaking this that and the other. Everything from knuckle in or out of the water to cap forwards or backwards was tried and tested.  In the end Giddy up increased close hauled speed by about 1.5 knots and Wingman by about 1.1 knots.

Then the kites were hoisted… Fast, fast and faster was the only way to travel.  Wing man had about 0.4 knots speed advantage.  A few crashes, a mine on each boat. Do it all again a few more times. All great stuff and then an over powered 2 sail reach at the death angle down the channel to get home.  Once back at the beach everyone agreed 4th rig would have been a lot more pleasant.

Things don’t get much better. Except next week when we sail up the river at South Brisbane.

4 years ago Centenary
See All Posts