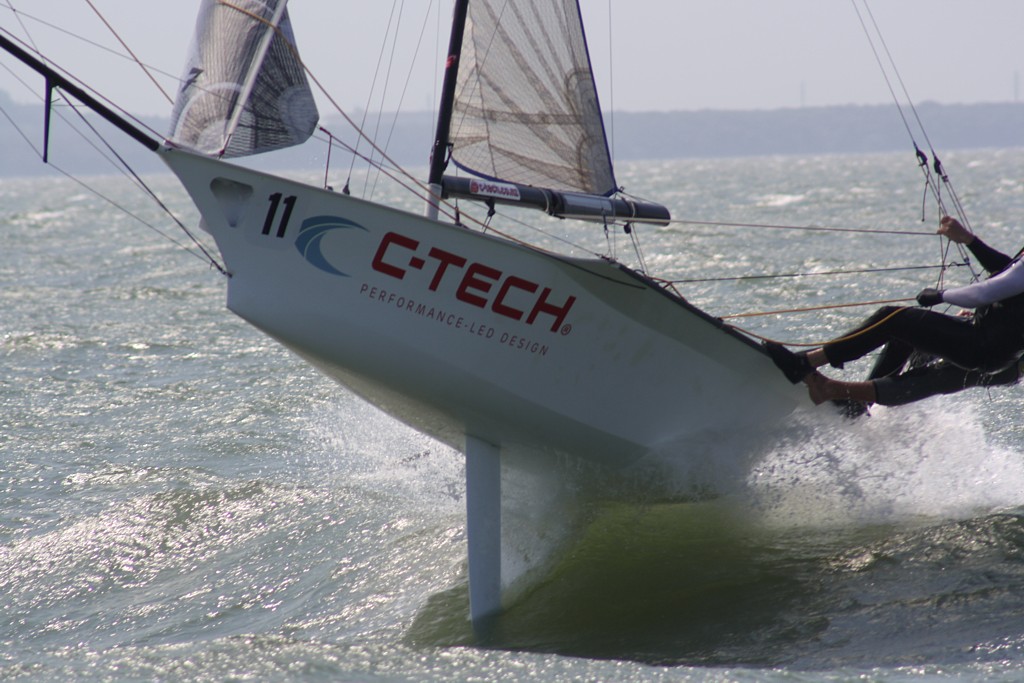 The little masts came off the trailers and the toy like sails were rolled out.. The sail out to the start was interesting.. Local boys on PB set off out of the channel after some womens windsurfer eye candy, and couple of skiffs followed after them only to realise that PB had very little board down at the time.. Those following hit the bottom pretty quickly and sent it down the shallow mine.. I saw a few of them running back to the centreboard…

The first race was quick.. A solid 25kts from the north saw the fleet power towards Green island at great speed.. There were a few lumps and bumps along the way, ok there were shit loads..!! Allwood Sails were first to the top and almost put it in during the rounding.. They were very much all over the shop and this resulted in AGAIG going in right on the top mark.. It was chaos..!! Boats tacking on each other, pushing poles through sails.. It was hectic… We finally got through the carnage and the rest of the race was smooth sailing.. Ha..!! Well done to the boys on Garde.. It was pretty rough out there and they sure showed a clean pair of heels taking the gun.. Te Guru was next followed by Nick and Andy on the Gemmell..

The breeze got fresher as the day wore on.. Just what the crews wished for..!! The second start was chaos, with Team Architecture doing some start line remodelling of Frankenskiff, then all boats headed North on Starboard.. On PB we felt fast and seemed to have plenty of height.. We got the the top mark in a great position (2nd or 3rd) and this time it was us who caused the pile up.. We sent it around the mark a bit hot and well, the pole went down down down… We got it up relatively quickly, only to see a capsizing AGAIG (I’m not going to lie.. It’s not a pretty sight…) We had a little tangle and eventually pushed ourselves clear.. Thank goodness the boat held together and we were able to battle on..!! I’m sure the rest of you have similar stories to share, and looking around this evening there are some extremely exhausted and dehydrated (I assume that’s the reason so much rum is being consumed..) crews floating about..

Back to the race… Garde were once again dominating in the field until they decided the Morton Bay tiger prawns were just too good to go past.. Ginge took it from there, and never looked back.. The C-Tech Performance took both the line honours and handicap results in the second race.. Absolute CNC did well too coming in second place. The Gemmell boys were 3rd, leaving them in the driving seat for the overall results..

It was a tough day out there, and especially after yesterday’s mammoth big rig effort.. I’m sure everyone is relieved tomorrow is the lay day..
It’s good to see we have already used every rig this regatta, and I hope the sailing continues to demonstrate that we are indeed sailing in skiff heaven..!!

Miners – Wolfie, but since everyone did one, his name was drawn from a hat

Spinners – Last year’s champ, Adam Forbes stepped up to take it by mining a wheelchair in the middle of the street.