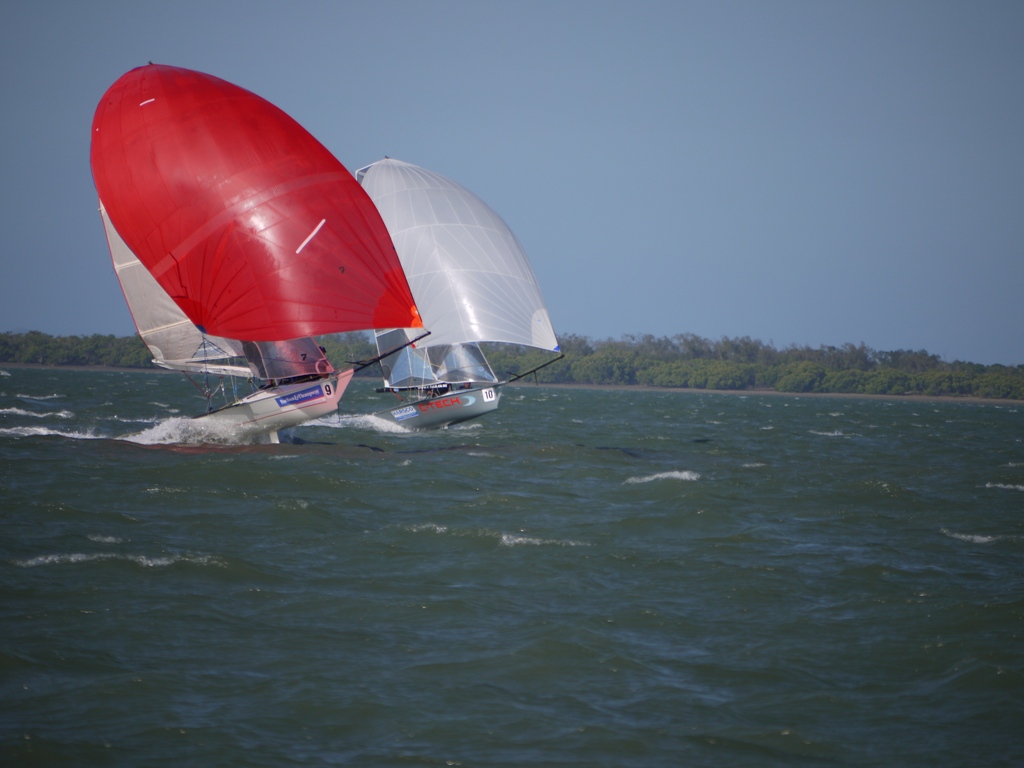 Nick Press and Andrew Stephenson sealed the title today with a win in Race 9, much to the delight of Murray Press, who flew up to Brisbane to watch his son take his 4th 12ft skiff Interdominions in a row. They didn’t have it all their way in Race 8, when a light wind start put them back in the pack. But they fought through to a respectable 3rd place after the wind filled in to a glamour 3rd rig. The wind god has certainly given the fleet a bit of everything this year.

CST Composites had a blindingly fast first windward in the light stuff, beating Harsco Infrastructure by a few boat lengths. A broken gooseneck ended their day. Harsco romped in for a 7th. As the wind filled, a few boats lost control in the lumpy Waterloo Bay waters, including As Good As It Gets being swallowed up whilst in 3rd place. C-tech/Little Bus showed a clean set of heels in Race 8 once they took the lead to take the win. Garde displayed good consistency to finish 2nd and Gemmell Sails round out the top three. The lads on Variety mistakenly tied in their 2nd rig kite and had to do a mad dash back to the club to get the smaller spinnaker. Fortunately, the fleet was too eager and a general recall gave them the time to get back in the game.

Some of our title sponsor, Harsco Infrastructure’s, representatives took to the water, showing their support from the spectator boat. I hope we put on a good show.

Race 9, the wind filled further and the racing at the front was tight. Gemmell Sails started fast and kept everyone at bay with a flawless display of windy skiff sailing. Frankenskiff, sailed by Tim “te Guru” Bartlett and Adam Miller hit a turtle and ripped off their rudder pintles. I can only imagine what the turtle looked like. The racing was ferocious and boats all down the fleet were changing places constantly. Garde and C-tech Performance round out the top three. Special mention to the guys who took the 2nd rigs for a burn and Absolute CNC for doing it in style with a 6th and a 5th.

Miners went to AGAIG for a pair near the top mark whilst in 3rd place.

Spinners was an audiovisual spectacle, with Robbie “Bruno” Polec doing some fun wrestling in the valley, and his sidekick Adam Forbes videoing it.