The Sydney 18s are coming!

For the first time since 1986 the Club will be hosting the 18ft Skiff Australian Championship from 20 to 22 March, to be sailed in Waterloo Bay from a base at Darling Point Sailing Squadron.

With 8 and the possibility of more skiffs heading north from Sydney to join with our own small fleet to compete in one of the premier events of the 18’s racing calendar this extended weekend will showcase why these skiffs are often referred to as Formula 1 on water.

Once again we host the 12ft Skiff Australian Championships. From the grounds of DPSS to the waters of Waterloo Bay the 12’s will demonstrate why they are one of the most exciting boats to sail. 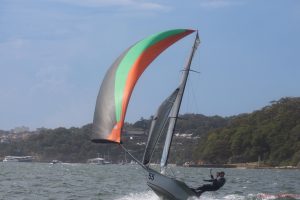 They have been described as many things but never boring! The harder it blows the more spectacular the racing becomes with the crews revelling in the conditions.

The 12ft Skiff National Titles will be held at Manly from April 3rd to 6th inclusive. Racing commences 2 pm on the Friday, 12pm on Saturday, 2pm Sunday
and 11am on the Monday.

The Qld fleet has gone from strength to strength with 10 boats likely to represent the Club in the Nationals. The season so far has seen close racing both on scratch and handicap with literally just seconds between them. Last year the Qld boats showed that they are fast becoming a force to be reckoned with, finishing 4th, 5th, 6th, 8th, 9th & 11th overall in the Championship.

Come and watch, be involved!

Get involved in these premier events, join the volunteers.

We welcome your assistance in any area – safety boats, spectator boats, galley, bar, race sponsorship, photography both on and off the water.

We will have 3 RIBS on the water each requiring three crew. We are currently sourcing crews, along with anyone who could assist ashore for all or part of the
Championships.

If you can assist please email us or use the contact form.

Sisters, Brothers, Aunts, Uncles, Cousins, Teen and Babies, In-Laws, Family and Friends – We hope to see you all on Sunday March 22nd when we host the 18’s Reunion Day. Join us at The Darling Point Sailing Squadron—Manly.

For those not wishing to go out on the water to get up close to the action, Alison will be your hostess at an Afternoon Tea. Get ready for some Grillin’! Don’t forget to bring photos, videos, good stories and favourite memories. You won’t want to miss it!

Meanwhile in other news…

The Club’s safety management is continually being improved, including making sign on sign off forms more user-friendly, and will have a major review in the off-season. The documents are on the Club website here: https://brisbane18footers.com/documents/