It’s true what they say; you never get sick of winning..!! PB Towage took out the coveted QLD State Title on the weekend with heats 4 and 5 being held on a picture perfect day on Waterloo Bay. 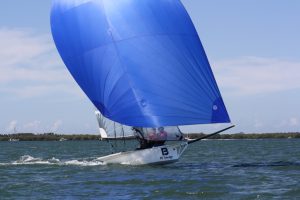 With a flaccid forecast and a few late scratchings the fleet was small but sure packed a mighty punch..!!

Five boats lined up for the final two heats of the series and there was plenty of smack talk on the lawn before the racing began.. It was 30 degrees and there was a steady 6kt Easterly blowing.. The light crew aboard Ghetto sled were crowing..!! With a 1st and two 3rds already for the series, Ghetto Sled was looking to pounce on the heavier crews to take their first championship crown. Things sure looked promising for them.. We all put in big rig, like we had a choice, and set off for the start line.. The wind picked up to a lovely 10kts and all crew were able to power up and pull two strings..

Aboard PB there were a few nerves going in to the day, as we were trialling the new rudder again… The first time we took it out was on a solid third rig day.. It didn’t end too well and shook up our confidence.. After a slight modification to stiffen the tiller, we thought we’d have another go with it.. Once we were out there we threw the boat around a bit to get used to it (did about 3 gybes) and all the confidence came flooding back. It was going to be a good day..!!

The first start was a good indication as to how seriously this Championship is taken. PB set up nice and early and sat patiently for the start.. Squid and Challenge yelled, pushed and shoved but PB had rights and forced both boats out and over the line.. Unfortunately we were all over so it was a general recall… Crazy times.. The second start was a cracker..!! Squid had the boat end, and then it was PB, Ghetto and Challenge (Old Yella) down the line. The Flying Animals were out there but had forgotten to tie in their battens.. Rookie error.. The first work was pretty standard with all boats heading left.. PB was first to tack and was clear. PB headed up the middle while Ghetto and Squid went left.. When the skiffs came together at the top it was PB first, Ghetto and Squid around next, with Old Yella close behind. PB set the kite and started charging.. A quick gybe and then a tight reach to get up to the gate.. Wow..!! Squid followed suit while Ghetto tried a gybe set.. Unfortunately they put it in the wet stuff and Old Yella took their place.. Like I mentioned, it was a tight reach getting to that gate and we had to work pretty hard to get there.!! PB made it through and with a big sigh of relief we eased springs and ran deep down to the bottom mark.. Squid was next with some pretty gnarly on the ear sailing, and Terry in Old Yella loving every second of it..!!

PB’s rounding was clean as was the next leg.. We managed to stretch our legs and open up quite a sizable gap by the top mark.. The battle for second, third and fourth was tight.. Ghetto sled made good ground by doing their splash gybe set.. They managed to make the gate no dramas, and had caught up to the other skiffs rounding just ahead of Old Yella..

The rest of the race was fairly standard.. The breeze was constant at about 10kts and nobody made any errors.. We finished in that order with PB taking the gun..

The second race was a bit closer.. It started with PB at the boat end but a bit behind Squid.. Ghetto and Challenge were a little down the line… All skiffs had pace and were charging up to windward.. PB were being squeezed by Squid but managed to keep their nose high.. We found a pretty nice high groove and stuck with it.. Everybody else decided it wasn’t fast enough up high so went in to low groove.. Lucky for us, it was no faster, just 15 degrees lower..!! We all hit the corner with Squid tacking first.. Then Ghetto Sled.. Tristan asked me a foolish question.. Should we tack on Squid and give the some dirty air? Or should we be nice and keep going a bit.. I promptly said screw them and threw it in to a tack.. Fortunately for Squid we were already a bit too far ahead for there to be any real issue..

Around the top and we were in our usual formation.. PB, Squid, Ghetto and Challenge.. Again it was a real struggle to get through the gate.. PB made it with one pretty close call.. We dipped a wing and I’m pretty confident that if we were using our small rudder we would have spun out in spectacular fashion..!! With the new blade I was able to man handle her to safety.. Looking back I could see the other skiffs having all sorts of trouble making the gate.. Some may have even dropped the kite.. PB were around the bottom and headed back up before we knew it.. Squid was a fair way behind so we didn’t really pay too much attention.. We just sailed out to try and make use of the tide.. Squid tacked pretty much straight after the mark.. We let them go for a bit before deciding to at least keep a loose cover on them.. Heading up the middle we were caught in the most hideous holes you’d ever seen..!! We watched as Squid capitalised.. They headed left to all the breeze… Things got a little tense on PB.. I’ve said it before, and I’ll say it again.. There is nothing worse than sitting in no wind while everybody behind you is charging along at full noise..!!! Both skiffs hit the corner and PB had a lead but it was not anywhere as commanding as it was at the bottom mark.. Definitely no room for error.. Around the top for the last time and PB set the kite and sent it home.. A dominating performance for the series by the mighty PB.. Dropping the third place from the first race, left PB only counting the bullets for the Championship..!! GAME OVER..!!

Squid put in an extraordinary effort to take second in every race, while Ghetto Sled after taking out the first race of the regatta ended up with third place overall..

All three boats are pumped up about going down to Sydney for the Nationals at Easter.. We’re all sailing well and the boats are going FAST..!!

Another exciting point to mention, is the prospect of another skiff on the water.. Marc Turner has finally re-launched his skiff after a major rebuild.. Quillon was launched on Sunday at the river club of Oxley.. Fantastic to see her finally on the water after hearing so much about her for the last 3 years..!! She is a reborn Nash 4 with a few modern twists.. Can’t wait to line her up against the Mighty PB Towage this weekend..!! They say red goes faster, but she’s still a fat boat and PB eats fat boats for breakfast..!!

Well done to all boats over the series, it was great fun and the longer courses will have sure helped our stamina leading in to the Easter weekend.. Look forward to racing you all next weekend..!!

Until then, keep the mast pointing to the sky and drive it like a rental..!! SEND IT, DON’T BEND IT..!!

H10s – To finish first, first you must finish
Galloping Ghosts