Ben Guymer’s prayers were finally answered as the Tank Girl hit the water.. and the heavens opened to celebrate.!!

The brand new 12ft skiff, designed and built by Ben Guymer, Tank Girl, entered the water with great ceremony and had its first hit out on the bay. Ben’s tiring months of work paid off with the boat looking great and sailing well. As with all new boats, the systems need a major shakedown, but they got a kite ride and showed potential upwind. The boat was rigged by a folly of helpers in the pouring rain, all eager to get under cover, but the desire to see the new girl on the water was stronger. Ben’s partner, Christine poured the official champagne over the bow, and Terry Ellis the unofficial Rum and Coke.

Racing got underway with about 100m visibility. 4 18s and 3 12s were stupid enough to endure the 0-15kt East sou-Westerly breeze. Tank Girl, who went out early, couldn’t find the start, so started heading home, then stumbled upon us about 1min into the race. So Ghetto Sled, Squid and Tank Girl battled away in the short windward returns. Squid had the upper hand with the 2nd rig and a working spinnaker, with Tank Girl prawning and Ghetto with the 3rd rig. They looked like they had it sewn up coming down the final run, but for a Westerly 15kt puff and they prawned the kite and capsized trying to get up to the finish line. Tank Girl, 2 sailing down the run, crossed first, then Ghetto shortly after. Ghetto getting the points because of Tank Girls non start.

Race 2 ended with Tank Girl heading home with a busted vang, Squid DNS with a torn kite and Ghetto only going around the 1st mark. 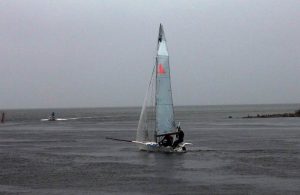