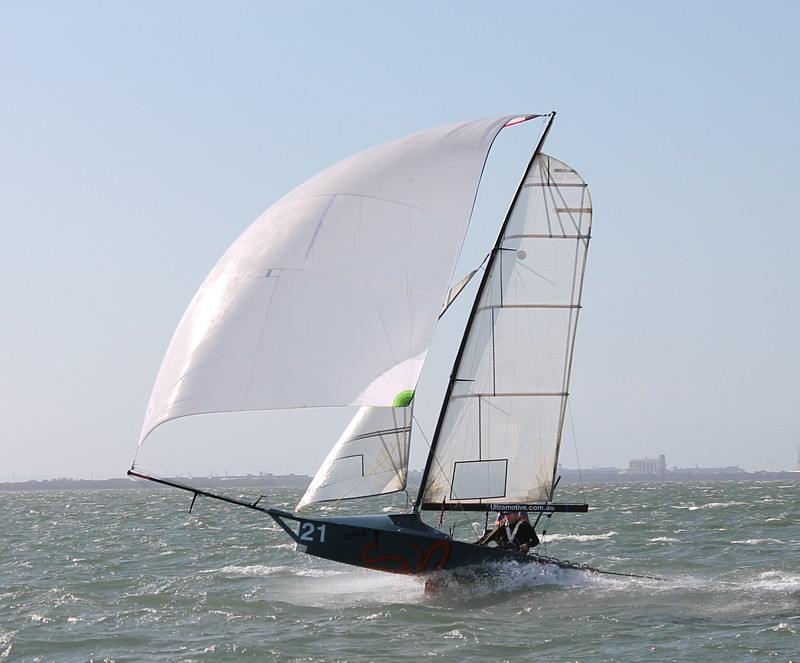 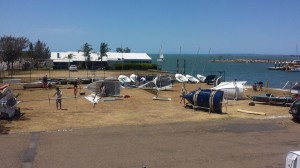 Brisbane turned it up a notch this weekend and what a ride..!!

The rigging lawn was packed with 8 skiffs.. With sailors coming from far and wide.. Joel even flew up from Sydney for the day..!! Why wouldn’t he.. The forecast was 31 degrees, 15-25kts from the North and an outgoing tide… That can only mean one thing… EPIC RIDES..!!!!

Ex-QLD stalwart Paulo was contracted to the Cougar to show her young owner a few tricks of the trade.. The Wingman had a crew substitution too for the day and welcomed back the Ton.. I think he enjoyed being back on the 12 so much he might even be locked in for next week.!!

The race course was simplified this week.. Simple sausage course for max speed and huge air.. The gun went and we were off.. Terry and Wayno got a bit enthusiastic and jumped out before pulling on the sails and teabagged right on the line.. They didn’t swim (Wayne did) but they gave everyone a bit of a head start.. Tank Girl nailed the start and shot off with max speed and max height.. The Wingman chased after them but made little ground on them.. We tacked on the corner and smoked up towards the top mark.. It was probably the patchiest it was all day and with 4th rigs in the boats it was an entertaining/frustrating leg where you would make good gains if you had pressure but when it eased off everyone would catch up again.. Tank Girl rounded first followed by The Wingman.. We still had a few minutes before the tide turned so this ride was super quick.. Benny and Craig nailed the gybe on the corner but were early.. Rookie error.. The Wingman charged on and picked a hotter line.. Both boats rounded the bottom together with Tank Girl shutting the gate on us and absolutely killing the rounding.. I’ve watched the footage over and over and the rounding was spot on.

The next windward was a drag to the corner.. Tank Girl had height but the Wingman was fast.. We rounded the top in close proximity.. Up went the kites and Woohoo..!! The ramps had arrived..!! Tank girl were the first casualty.. Perfect mine… If you haven’t seen the footage, do yourself a favour.. It was classic. On board The Wingman we were laughing and high fiving.. Unfortunately not 5 seconds after our hands slapped, our soft shackled kite sheet let go.. Flap flap flap..!! Damn it..!!! We dropped the kite and I handed the silly stick to the Ton and headed forward to re-tie the sheets… Now I’m the first to say that chutes are the bomb.. However when the fan has been hit, they are a fricken nightmare.. I tied the sheets back on just hoping it was on the right side of the retrieval line and the halyard etc.. By this time we saw the damage.. Terry and Wayno were stonking down towards us at warp speed, Havoc looked totally “in control” going about 10 degrees lower than everyone else in a demon gust.. We gybed just in time to see their massive crash.. It was the old launch, bounce bounce SPLASH..!! I can only assume they suffered some form of whip lash as we didn’t see much of them after that.. Tankers were back up too and managed to lead Squid around the bottom mark.. The Wingman was next with The Cougar hot on our heels.. One lap to go and you could throw a blanket over us..!! GAME ON..!! 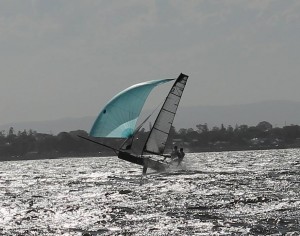 There were no position changes up the work and by the top Tankers had a slight gap on Squid who rounded right with The Wingman.. Cougar just creepily stalked us from behind.. Up went the kites for the final dash for the finish.. Thank god ours went up… She was a bit tangled and the retrieval was causing a massive bum part, but she was set and pulling hard.. We stormed towards the finish.. Terry gybed a bit early and we held on to come in to the finish hot.. Coming in to the line Squid was on starboard, The Wingman on port.. It was going to come down to who gets the bigger puff.. The Wingman got it.. The bow went down, the skipper cried out Noooooooo…!!! The bow popped up and the Wingman charged on through the line to take second place.. As we dropped the kite after the race the sheets let go again.. Phew.

As it always seems to do the breeze and waves picked up between the races.. I know this because I was up the bow of my skinny skiff trying to work out how to re-tie the sheets again… I was going under waves like a Volvo 70 and Trisso was do his best to keep us upright.. We finally got the sheets reattached but were a long way from the start boat.. We could see flags but not which ones they were..

We crossed our fingers and hoisted the kite.. What a mess… There were tangles on tangles.. BUGGER..!! We decided to continue on  with the next race without a kite as the breeze was now pretty strong and we figured Benny and the others (but mainly Benny) would spend some time in the tide.. 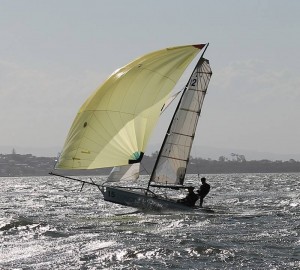 The gun went and we were off.. Squid accelerated a bit too quickly and I heard a cry from Wayne “TEEERRRRRYYY..!!” I turned my head to see Terry swinging around the back of the boat.. Oops..!! Apparently Terry misjudged the start boat and Wayne caught a bollard at wind up speed. Terry ended up on the outboard and Wayne jammed between the skiff and the RIB. A quick check for broken bones and ligaments and some swearing and they were off, giving the fleet a 5 min headstart..

Tank Girl smoked out to the corner with The Wingman and Cougar chasing hard.. We all tacked relatively close with The Cougar relishing in the extra breeze.. Tank Girl rounded the top first with The Wingman 2nd and Cougar 3rd.. Up went the kites (except ours) and Tank Girl shot off at an incredible speed..!! It was short lived because with the increased wind, the ramps were becoming outright dangerous.. Tank Girl found a nice place to bury her nose and before you could say “far out brussel sprout” down she went..  It looked pretty epic from our boat.. The Cougar put up the yellow kite of death and flew down past them.. Paulo and B-Mad were pushing the old girl to her limits and she was loving it..!! It’s been a while since she’s been put in those positions and she handled it like a pro. The Cougar rounded first with daylight to The Wingman in second.. The Cougar was being flogged hard by her skipper and she loved every second of it.. The Wingman had her lined up in her sights and the call “run rabbit run” was motioned. We chased hard but only caught them as we rounded the top mark.. B-Mad jumped in off the wire like a boy possessed and up went that yellow monster.. We watched as the old girl burst in to action.. She was leaping high and bouncing around like girl half her age..!! She had a big lead by the bottom mark but the never say die Wingman kept on charging.. We tried to fix the kite again and on a whim we just hoped we had untangled it.. WE hoisted and ouch.. It was now triple tangled..!! It was so embarrassing we dropped it just in case Richard took a photo of us with it up..  Squid had caught us by now but we rounded in second again and set our sights on catching that rabbit.. The expectation for B-Mad to choke was high.. We chased as hard as we could but again only caught them at the top mark.. The old girl had half a leg to go and she was showing no signs of slowing down… Up went that yellow kite for the last time (with a lot of smack talk coming from the Wingman) and Whoompa..!! They were off.. Victory went to the Cougar.. Squid passed The Wingman to claim second and The kiteless Wingman got 3rd.. 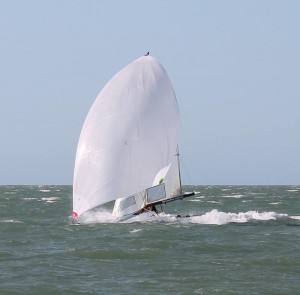 What a huge day.. There was a lot of video footage taken and I’m sure it will surface soon so you can see some of the spectacular rides..!!

For those that missed it, SUCKS TO BE YOU..!!! Definitely one of the best days on the water this season..!!! (probably the best..)

I’m sure I’m not the only one to have looked, but the long range forecast looks like more of the same next week..!! Better charge up those GoPro’s and fix any niggling repairs to the boats.. It’s Game On next week..!!!