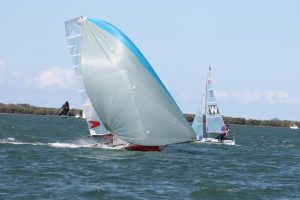 With the welcome return of Old Yella, The crews were pretty excited about hitting the bay for some fun in the sun.!! Conditions were perfect for some magic racing.. NE 10-15kts.. Out going tide.. Sun shining.. It was shaping up to be a top day out..!! With two of the three 12’s carrying at least one crew of less than 70kg’s there was some indecision as to whether or not the sea breeze would kick.. However, by the time we had to throw a rig in, the breeze hadn’t yet come.. PB were carrying full weight so opted for big rig… Ghetto Sled and Old Yella thought that the planets were aligning and we’d get our 15kts so put in 2nd rig..

We got out to the start line and it was blowing a steady 8-10kts.. Big rig was looking like a lovely option..

The start gun went and only two boats crossed the line on time.. PB Towage and an 18ft skiff called Queenslander.. The battle was on.. PB had plenty of height but the 18 managed to squeeze ahead and mess with our air.. Ghetto was not far behind and Old Yella were also making a dash for the top mark.. PB tacked first to clear their air while the other 12’s powered towards another line of breeze off to the left… I know it sounds a bit silly, but I have developed a slight phobia for that bottom left hand corner of the race track… It’s the burial ground of my favourite 2nd rig, and the ocean floor has been known to jump right out in front of you without warning..!!

So we powered to the top mark behind the two leading 18’s.. We were pretty happy to be keeping in touch with them.. PB was around first, then Ghetto and Old Yella taking third place.. With the big kite up PB were able to put some distance between their competition.. We past an 18 and were second overall around the bottom mark… Ghetto followed with Old Yella again not far behind.. PB played it safe and just hit the corners to comfortably be the first 12 around the top mark.. The 18’s all went left and caught and past us.. There was less breeze inside Green Island (not the one off Cairns) as to be expected but hey.. There was some tide to assist us in our quest for victory.. PB Towage sailed a faultless final run to the finish to take the first Club Championship race of the season. Ghetto Sled was second and the mighty yellow beast took the bronze..

The second race was looking a bit better for those with the smaller rig as the wind had kicked right in..!! It was gusting to about 12kts..!!!

The race course was shortened and all three 12’s hit the line on time..!! The boat was set up and absolutely trucking..!! We heard a shout from the boat end of the line.. “You’re all over..!!” A moment of hang on.. No we weren’t.. Were we..?? Maybe we were… Nah couldn’t have been.. Took place before Tristan looked back to see Terry’s big grin… That crazy old coot had me totally confused.. However we put the foot down again and shot off towards the dreaded bottom corner.. We again tacked off first and lead the way to the top mark… PB certainly has the big rig cranking.. Plenty of power down low, with speed and height to burn..!! It’s truly a delight to sail..!!

A short blast to the bottom mark (which was moved halfway up the course..) and it was PB followed by Ghetto and then young Terry on Challenge (Old Yella)…. I’m not sure if it was just that Old Yella were enjoying their ride, or they just thought that doing the shorter course was for pussys, but the lads sailed straight past the bottom mark and down to the original starting mark before ditching the kite and heading back up to the top mark..!!

After their textbook drop, PB had powered back up to the top mark making gains on the competition all the way… Around the top and send her home was the call… The ride to the finish was a goodie.. I even had my back foot on the rack..!!

They were perfect conditions out there.. The racing may have been very different if the wind had kicked, but everyone knows you have to rig for the lulls..

Those DNS will hurt you later in the season Squidgee.. You have got to be in it to win it..!!!

Next weekend we head to Warwick for a full weekend of fun freshwater sailing..!!