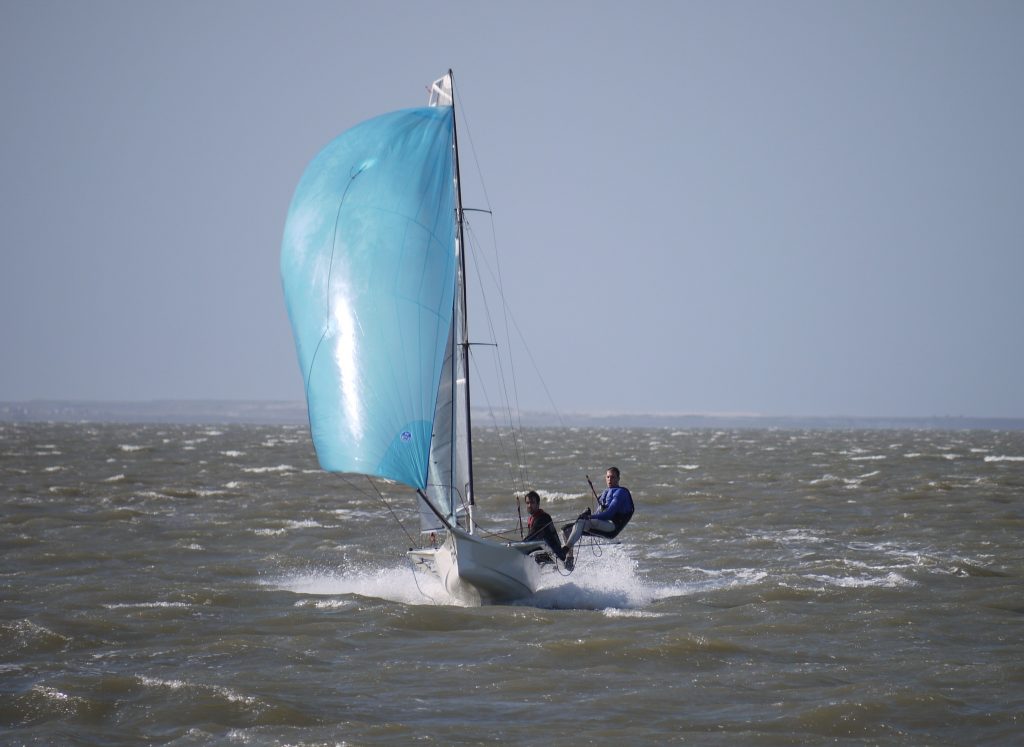 Groundhog Day in Brisbane, with another 4th rig northerly ramping up the fleet of 6 skiffs.

Some more mixed crews challenged even getting to the start line and Tank  Girl was first off (I’m sure they were over – Ben had to check the flags), with Ghetto Sled chasing hard. Havoc was also pushing hard with Josh and Dan keen to get amongst it. A near miss between Ghetto and Tankers up the work prepared us for the kite set battle. The first run was a test of nerves, with everyone setting kites and Tank Girl the first to dive in. Ghetto Sled followed during the gybe in the surging chop and from the blue, Havoc had the lead.

No kite was seen at this stage from Josh and co, so Tank Girl also decided to keep it in the chute until the bottom mark. Ghetto shook it out and after telling the boys on Pennyliss that yes we had started, rounded after Havoc and Tankers. Ghetto tacked early and looked to make gains up the work, with King Island coming into play as an obstacle that added tacks in the washing machine. 2nd top mark and Havoc lead, almost swimming during the hoist after some acrobatics on the wire by Josh. Ghetto gybe set and headed for less (yes less) breeze. Havoc had the ride of the day and was looking good towards the last bottom mark. Ghetto was coming in hot, but the kite halyard slipped a few feet and it was teabag time. Tankers stayed up and was not far behind Havoc. By this time, late starters Cougar, steered by Paul O’Malley-Jones, was just behind and Skiffropes.com, with guest skipper Laurie there too. 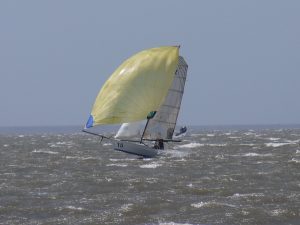 Coming up the last work, Ghetto, in 5th, once again tacked early to try and make up some ground. Havoc and Tankers were well ahead, a boat – on – boat session pinching for the last top mark, then made a last minute push for the finish on the final leg.  Going for all or nothing, two strings pushed Tankers’ layline above the finish forcing a last minute gybe to weather of Raven’s anchor chain.. Havoc crossed first and Tankers put it in the piss after the gybe to secure second place. Cougar was in 3rd with Skiffropes falling at the corner. The last run to the finish had Ghetto gybe early and run deep, Bmad took the later gybe a little casual and the kite filled on the wrong side, throwing the Cougar down the mine. Unrucky.! 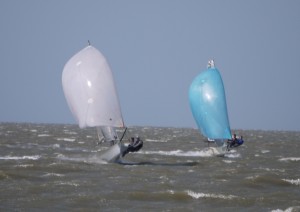 In the meantime, the kiteboarders had start line tangle, which could have been disastrous if the RIB crews hadn’t helped them out. 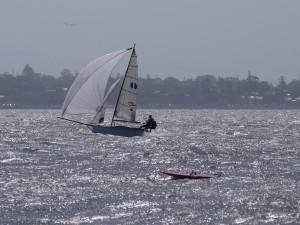 Only 3 boats stuck it out for the 2nd race, with Josh having to go early to the Hi Five concert. The 2nd race was a match race between Tankers and the Sled again. Deja Vu. Tankers had the early lead, but Ghetto mined during the kite set and let Tankers get away. But not for long. Another mine shaft claimed the tank and the race to right was on. Almost a collision in the middle of the bay as Craig hoisted the kite, with Ghetto rolling over the top. Steady gybes, then pushing again to the bottom mark. Ghetto split off offwind, but the matched boatspeed had us rounding the mark together. A slow set on the Tankers had Ghetto’s bow pole up Ben G’s a-hole. Not sure how that happened. Both set off down the run, through the gybes safe and then blasting to the bottom mark for the last time. The extra height and weight of Craig proving a big difference when only 1-string and Tankers extended away. Ghetto went for a bit of a 2-string ride and managed to close a bit without searching for oil. Up the last work and there was only 50m in it. Tankers kept their cool and finished with the win.

Sydney better deal up some 4th rig wind for the Inters, because the Brisbane boats are prepared, with 5 of the last 6 weekends in 4th rig weather.!!