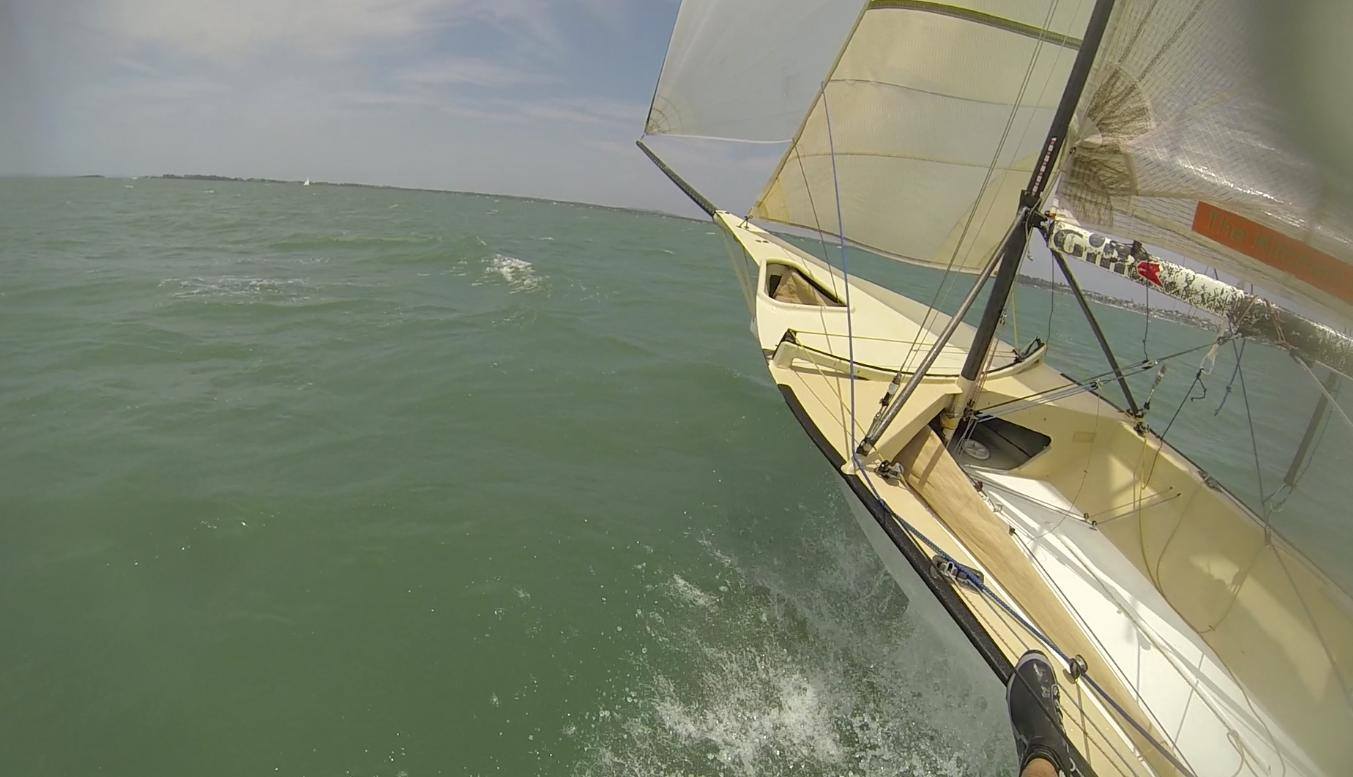 With a forecast of a 20kt Northerly and an outgoing tide all week, the lads were more than amped for Saturday to come around.. With another new boat on the rigging lawn, the vibe was awesome!

We hit the water with the fleet split between 3rd and 4th rigs.. fat vs skinny..!!

Ghetto and Tank Girl won the start with The Wingman and Squid left in their wake. The Wingman quickly tacked off to clear the air and try and make use of the fast running tide.. They hit the layline and it was show time.. Ghetto and Tank Girl crossed the bow but kept on sailing overlaying by a mile.. Ghetto followed The Wingman around the top but Tankers stuffed their tack and were sent to the back of the fleet..  Squid were coming in hot and right on out tail to round in 3rd.. The ride to the bottom was nothing short of sensational..!! With all of us leaping high in the sky and yahooing the whole way down.. The Wingman gybed first but under-layed, Ghetto made up some important meters while the Wingman flopped about gybing and dropping.. The Squid got it right and had the two skinny boats locked in their sights.. Ghetto stomped on the accelerator and sailed up inside The Wingman.. Getting to the top The Wingman tacked first showing Ghetto the lay.. Ghetto cracked sheets and came storming back down fast.. Squid put in a solid effort and we could feel the old boys breath on our necks.. Around the top it was Ghetto closely followed by The Wingman and Squid.. SEND IT was the call.. and that exactly what we did..!! Ghetto were able to get around first as The Wingman again under-layed, Squid were firing away from behind and Terry’s grin was freakishly large.. It was a little frightening to be honest.. I didn’t enjoy being so intimate with them that’s for sure.. We worked our way North again with Ghetto once again showing good pace uphill. Tacking for the lay and the Wingman looked to be a solid second.. That was until the seas parted and a wall of white water flooded over the bow and down the shute! The next thing we knew we were flying around the forestay..!! WHAT THE..!! The Squid sailed around us giggling to themselves and we finished in that same order..

Race 2 got underway in a freshening breeze with all 4 skiffs hitting the line with speed. The Sled tacked out early after getting stuck in the afterburners of Tank Girl and The Wingman. Squid low grooved it out to the left and Ghetto was left alone on the right. The right was paying in the first race with the tide ripping along Green Island (not the one off Cairns).

Converging near the top, the Ghetto had right of way over Tank Girl, who eased sheets to duck then, with a lumpy, overcooked 3rd rig, decided better of it and crossed inches ahead. The avoidance by Ghetto was sorted out at the bar. Tankers’ trouble tacking allowed Ghetto to leebow on the layline at the next cross and both boats were neck and neck around the first mark. More trouble pulling the kite up on Tankers saw Ghetto have to flag their kite to avoid running up over their transom. Both boats screamed away towards the gybe mark, Tankers a little lower with their 3rd rig. Squid was not far behind and looked fast off the breeze, Terry and Wayne praying their hearts and knees wouldn’t give out before the end of the day. Ghetto had to drop and gybe back to get to the bottom mark, narrowly avoiding the square-running, goosewinged kite drop of Squid.

The 2nd windward was a procession of fast skiff sailing. Ghetto had speed and height and closed in on Tankers, with Terry and Wayne going for the opposite side of the course, obviously because the tidal advantage had declined. Apparently the “Mighty” Wingman had called it a day to get to shore in one piece and lick their wounds. Some say Cougar and Pennyliss saw blank stares as they sailed past. Most think it was because of the 10 point windward mine into “a rogue wave from the southern ocean”. Not a simple task considering it was a northerly.

The 2nd run was a wild one with an extra kick in the breeze forcing skippers to the gunnel. This was still not safe enough for the firing Tank Girl, who saw red, then brown as they put it down near the bottom mark. Pilot Ben Guymer decided to hang on to the transom, despite his bow pole being stuck firmly in the sticky mud. Craig narrowly avoided another trip to the dentist by clearing the forestay this time. Video footage from on board the trailing Sled should be on the editor’s desk now.

Ghetto had their own issues with a near capsize when Richard jumped on the wire to show them how its done, while laughing as they passed the nose down Tank Girls.

From here in Ghetto maintained a strong lead and made it 2 from 2 for the day and club championship.
Squid had a consistent day to post two 2nds and Tankers limped home without their kite, clearly forgetting what they learned in Wellington.

Great day on the water and good practice for Easter. 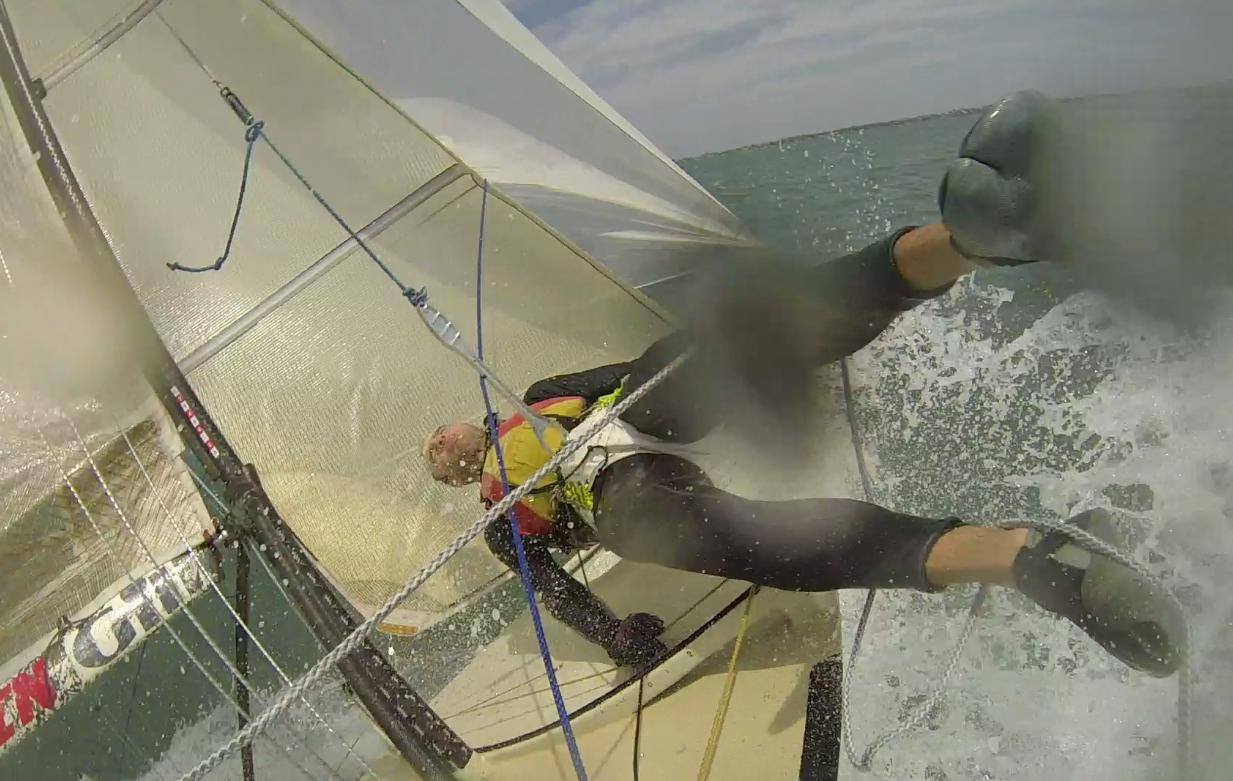