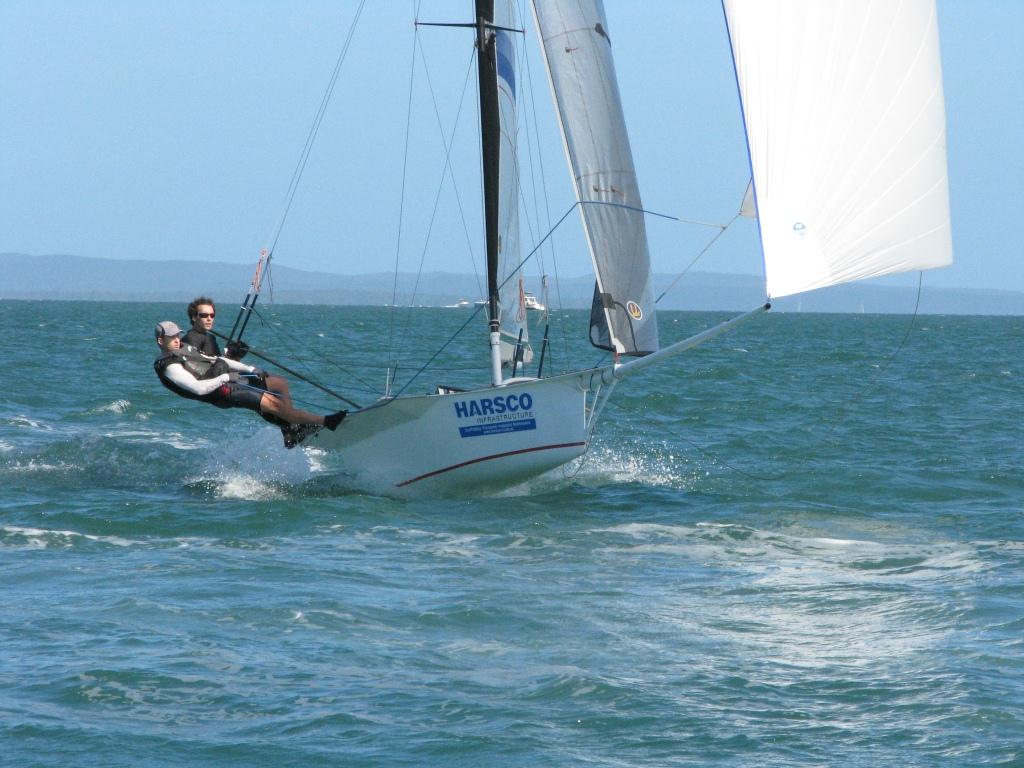 Clear skies and scorching heat greeted the excited skiff sailors on Saturday.. The forecast was lame.. Certain narrowly built skiffies had been doing their no wind dance all week and when we got to the park, the thought of second rig wasn’t even entertained. 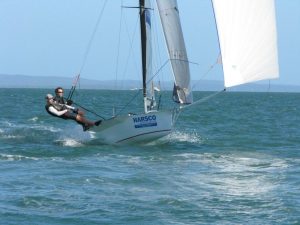 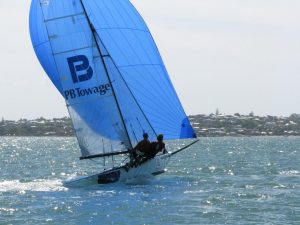 Video – from a few weeks ago. 3rd rig rides on board Ghetto and Squid

There was the usual chatter among the lads, but the tone was different.. It was the State titles.. New sails came out, Brendan made his annual appearance.. Game faces were on.. This day was setting up to be explosive..!!

PB hit the water first and we were pleasantly surprised that we could pull two strings..

We found the start boat and waited for the rest of the fleet.. This day was going to be exciting..!! The boys on Harsco were pretty excited.. They knew these were their conditions.. They had danced their dance all week..!!

The start sequence was underway and the fleet split.. Squid and PB Port, Old Yella, CST, Ghetto (Harsco) and Allwood sails were starboard.. After the start gun went the port hand bandits on PB and Squid came through with pace, crossing the other skiffs with ease.. Ten seconds after the start an almighty splash was heard and we all looked around.. Allwood had snapped their trap strop.. Ha! 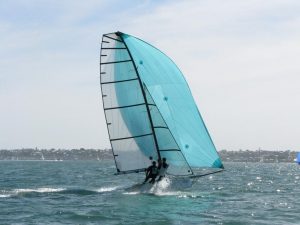 PB hit the right side of the course to find some outgoing tide.. It paid and when they crossed the fleet a second time they were ahead.. Harsco had made a bit of a move on them but PB still held the lead.. The breeze was sub 10kts but everyone was able to pull 2 strings.. PB rounded first followed closely by Harsco and Squid.. CST were next with Old Yella and Allwood bringing up the rear.. Harsco were quick downhill and played a nice shift on the inside of Green island passing PB who hit the lay.. PB did a better drop and took back the lead at the bottom mark.. PB covered Harsco up the first bit of the work but saw an opportunity and tacked off on to a nice lift.. Harsco cleared their air and then tacked also.. When PB tacked again they crossed Harsco by inches.. A few more shifts and we were at the top mark.. PB rounded first with Harsco hot on their heels.. Up went the kites.. PB did a glamour hoist and scooted clear.. Harsco were going low groove and were first to gybe.. PB gybed too and it was the drag race to the finish..!! Harsco looked a little high and on PB we were feeling pretty chuffed with ourselves.. That’s when it happened.. We saw it coming and hoped it was something different.. It was the sea breeze..!! Both skiffs got towed and were pointing below the finish mark.. Luckily for Harsco they were a bit higher and were now in the perfect position.. PB had to drop the kite where Harsco scraped through the line to take the first QLD Championship heat.. Well done boys..!! Great racing.. When Huey throws you a line, grab on to it with both hands..!! Squidy were next across the line and having a great time! Allwood sails retired as they had now broken both trap strops and a trapeze harness..!! 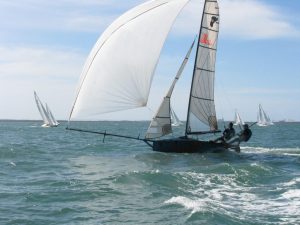 The sea breeze had now set in.. It wasn’t anything special.. A delightful 11kts..!! The start was pretty standard.. PB were a long way down the line, Harsco and Squid up the top.. All skiffs were on starboard and heading North to the nice breeze.. PB was first to tack and crossed the fleet.. We headed over to the right side of the course again.. Navigating through a million lasers, we popped out the other side with a handy lead over the other skiffs.. Harsco were in second and again Squiddy nipping at their heels.. PB rounded first and up went big blue.. We scooted away downhill and had a great big rig ride.. Harsco were next and Squiddy still in 3rd.. PB hit the lay and kept the lead.. The next lap was the same with PB hitting the corners and Harsco following in second place.. PB took the second heat by 43 secs.