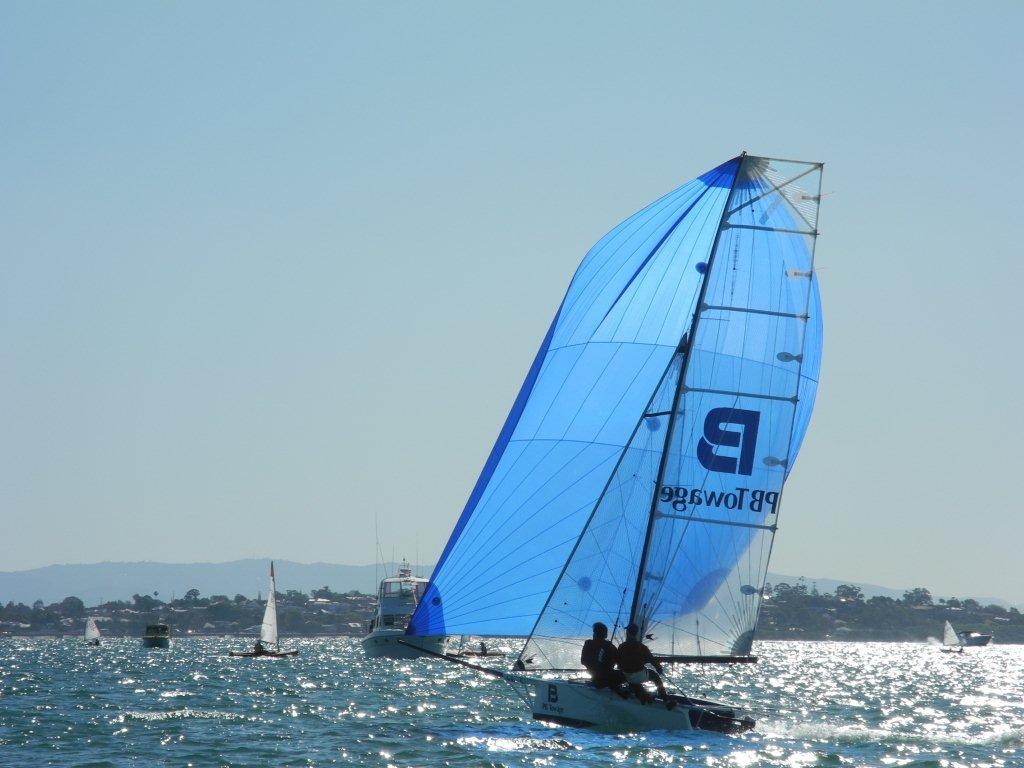 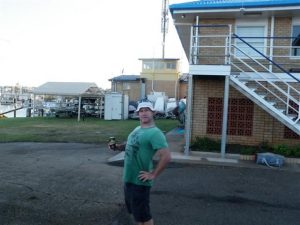 PB Towage took out their 3rd straight QLD State Championship on Saturday.. With the late scratching of Ghetto Sled due to “family commitments” PB found themselves in a win-win situation with only a finish required for the final two races to take out the Championship.

The forecast was horrid.. 15-20 in the morning dropping out to nothing at lunchtime… Lucky for the skiffs the weather guru’s got it wrong wrong wrong..!!!! Down on the bay was a gorgeous 10-15kts from the North… Champagne big rig sailing..!!

As most of you would know Brisbane has copped quite a hiding weather wise recently, with non-stop rain and fresh winds.. Well she sure turned it on for us on Saturday..!! 30 degrees, not a cloud in the sky and 10-15kts of steady NE breeze.!! Yeeha..!!

On board PB we were feeling pretty confident and I guess somewhat cocky.. We had the Championship in the bag and the breeze was amazing with the boat going like a train.. It was shaping up to be a simple 3 laps of celebratory fun… Unfortunately for us, Terry and Wayno on the Squid had other ideas…….

The start gun went with PB and the old boys on Squid both hitting the line with plenty of pace… PB had the upper hand and tried to shake the Squid, but her tentacles were obviously firmly latched on to our centreboard because no matter how much crappy air we threw back to them they just hung on and sent us way off to the left hand side of the course.. We finally got a slight gap and decided to tack.. Trisso and I agreed that we had to nail the tack or we could be in a bit of trouble.. Through we went and out we popped on the new tack.. Unfortunately for me the pressure was too great and I lost my footing, I went swinging straight in to Trisso taking out the big fell’s legs.. It’s true you know, the bigger they are the harder they fall. We were over.. Lucky we have a retractable pole because Terry and Wayno only just managed to avoid us.. We hurried to right her, but that never works.. We ended up flopping over again and losing even more time to the slippery squid..!! 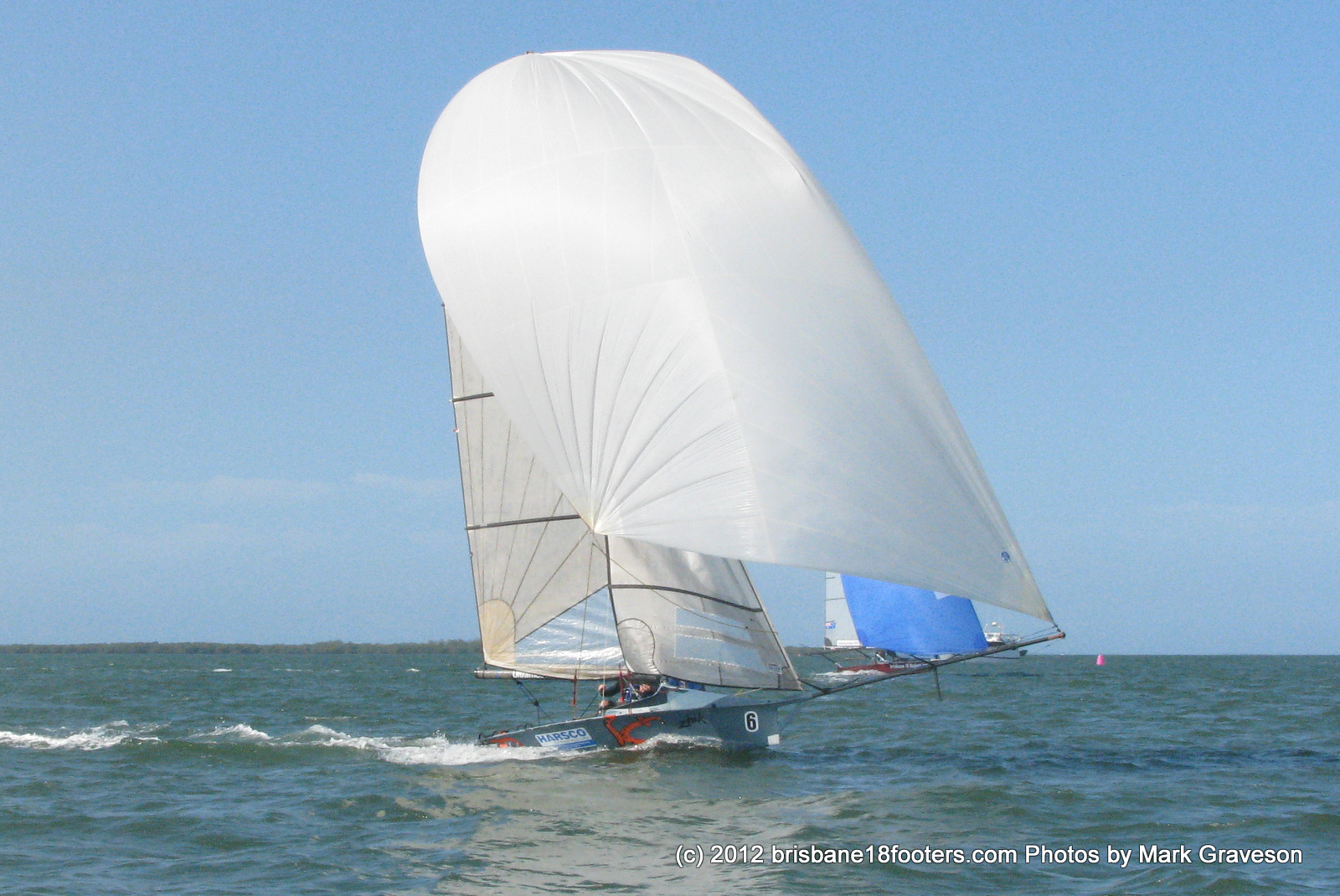 Around the top mark Squid had a nice lead of about a minute.. They sent her hard but PB sent it harder.. We made some good gains down the run by picking a better line in to the gate.. Unfortunately we threw that away too when we had a rookie swim on the gybe.. We watched as the Squid extended their lead… Once the boat was up we got her going and set our sights on that cheeky cephalopod and prepared ourselves to chase her down.. One thing I’ve learnt is that there is no cruise control on a 12 footer.. Especially the narrower BMMKII design..!! You have to go hard or go home. 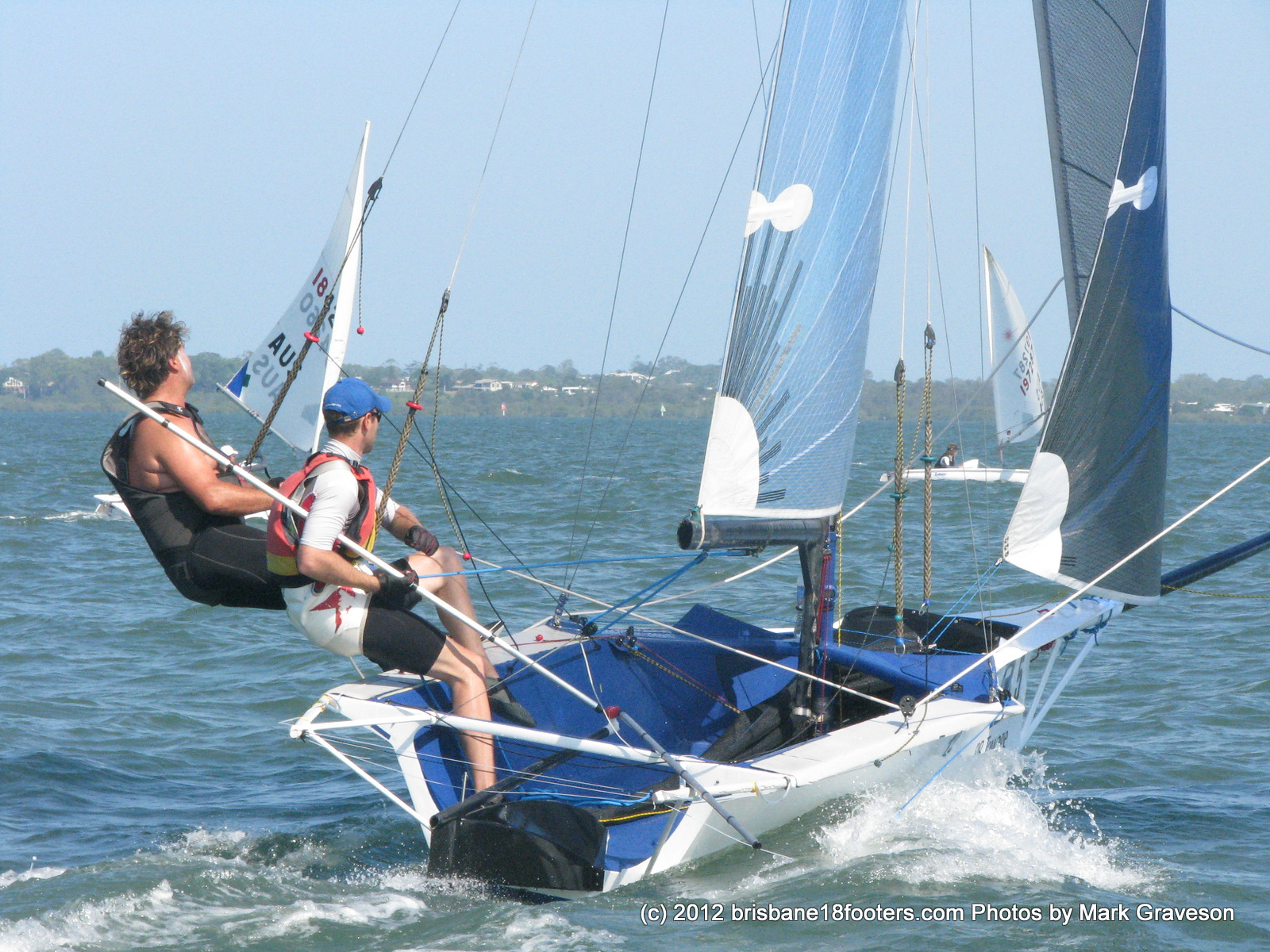 Well the next lap saw us make a few gains and brought us back in with a chance.. We thought however all was lost when we found ourselves on the wrong side of a 20 degree shift.. Luckily the Squids situation was not much better as they shot off with their kite up.. PB did a sneaky gybe set and were heading straight for the finish.. I’m not exactly sure about the details, but when we looked up to see what was going on ahead of us we saw that bright orange squid on the bottom of Terry’s hull…… The old boys were quickly packing the soggy kite but PB was coming on down with the big blue kite and there was not much they could do to stop us.. PB took the gun and the Championship… The boys on Squid had been robbed.. Terry had a bit of blood from their crash but there was no way he was going to head home for treatment.. He had unfinished business to take care of..  Great racing lads! 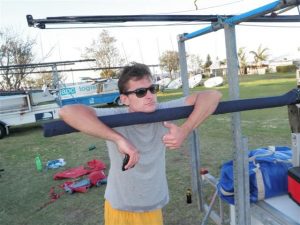 The second race start was a cracker. Both boats at full pace with PB once again just able to breathe a bit better and ended up sending some ordinary air back at Terry and Wayno.. We hit the corner in an almost identical situation… We had to nail the tack to clear the Squid.. Trisso and I went in to it with a bit more confidence after the first race and we smashed it. Turns out we didn’t need to worry as the Squid tacked at exactly the same time anyway.. It was a drag race to the top mark now with Squid finding a bit of height and really putting some pressure on us.. We went around the top together with PB doing another gybe set. The two skiffs scooted off in different directions and this sure built up some nerves for the skippers.. PB decided to come back to keep a loose cover on their rivals and luckily for us we had made a few gains out to the left.. We negotiated our way through the gate and down to the bottom mark with a handy lead.. Not a comfortable lead, just a handy one.. There was no room for error as we made our way back up the top for the final time.. (course had been shortened by one lap)

We held our lead with a mistake free display and covered the old boys all the way to the finish..

An awesome day out with another fiercely contested QLD Championship series being won by the ever consistent PB Towage.. Thanks to the volunteers and race committee for the series, and a special thanks for Christine for her mammoth efforts onshore. Your dedication is much appreciated.

Next week is back to our regular club racing before we head south to battle it out with those NSW boys and girls for the Australian Titles at Abbotsford. 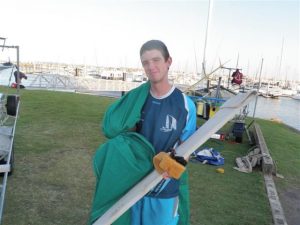