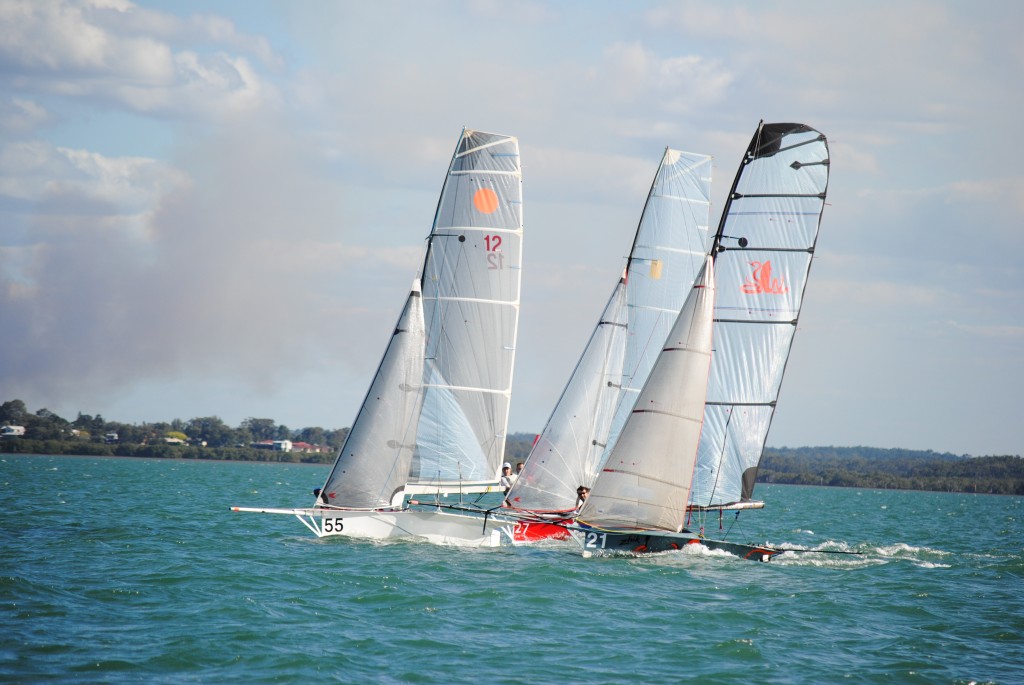 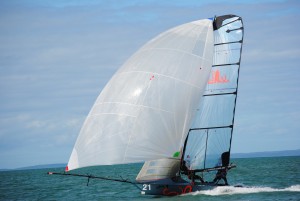 Here’s the first draft from the front end of Squiddy!
With Shaun out with a busted middle finger from catching a ball, Tankers stayed home and I jumped aboard Squid to find out what it’s like at the front end of the boat. Figured I better brush up on some crewing tips to avoid damaging Terry’s knee reconstruction. With a hip reconstruction suffered by Crossy on board Ghetto Sled, and no off season practice, I figured the odds were somewhat even. The Wingman forgot their theme song ‘falling apart’. Laurie got there but his crooked pole shamed him into leaving the boat at home. A broken toe on the skiffropes.com, Paulo still building his new boom, Brad off playing navy bosun, Lindsay still building his new skiff, Brendon Mann needing rigs and Josh Franklin building a new hull, Angus still screwing fittings on the renewed “77 Sunset Strip-pers” and the Qld 12s were sounding like coulda shouldas with only 20% of their skiffs “ON THE WATER”. Squid and Ghetto lined up for the start nicely on time. A bit fell off Jono’s sail, so the Wingman had to wait for the second race to get the kite halyard jammed in the hoisted position 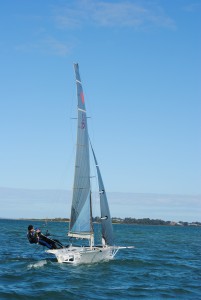 We crossed the start line and chaos ensued, was Terry taking the main or was I? In the meantime I forgot about the jib and the vang.. Ghetto Sled shot off and we followed. Tacked at the layline, I fell over the thwart and landed on Terry’s knee. We teabagged, but fortunately I didn’t get my hair wet and Terry didn’t seem to mind, I suppose his svelte new wetsuit kept him warm while I wriggled about on the floor upside down. Pulled up the kite and I found out there is plenty of fun to be had up the front of a 12. The skipper has all that worrying about keeping upright and steering and stuff but all I had to do was bounce around and pull the yellow ropey thing. Besides Terry was all the way at the back of the outriggers.. maybe I smelled bad. We performed our first gybe flawlessly, in that the boat was still upright. High fives all round. We come in for the drop and I use my finely honed skipper’s judgement to time the drop. We sail past the buoy and I have successfully released the tack line and mostly prawned the kite. I think, I must be made for this, I do it exactly the way all crews do it. I finally get the kite in, grab the mainsheet and forget the jib. Second time around I nail the hoist and sheet on. I look back to find Terry doing a jig on the gunnel, his feet scrabbling for an edge of the slippery Squid. It’s obvious he has the good ship under control so I laugh helpfully. We get somewhere near the layline and we gybe too soon, setting the pattern for the rest of the day. Skippers… Ghetto won comfortably and The Wingman was seen heading out to the race course. 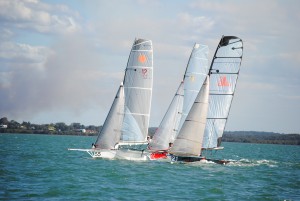 Second start and we’re a well-oiled machine. I’m counting the time down and generally being as helpful as possible in my new role. I make sure I give lots of useful instructions about starting but I feel they may have been ignored. In any case Terry starts getting shouty while Ghetto Sled rolls us. Skinny tacks off, heading away from the persistent East shift which we’re quite happy about. Ghetto gets to the top first. Squiddy and Wingman are closing fast, but we have to tack and Wingman rolls past. Everything goes smoothly this time around.. the rides are great. Dunno why Terry is sitting on the side yelling at me again. Typical skippers. I realise shortly after I have his trap ring and he’s missing out! Better fix that. Get to the bottom mark for the drop and Terry gets all shouty again. Something about Wingas being on our tail so I do my best impersonation of Brad Madders to try n get the kite down in a hurry. Turns out Skinny had his kite stuck at the top of the mast.. 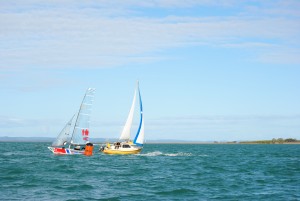