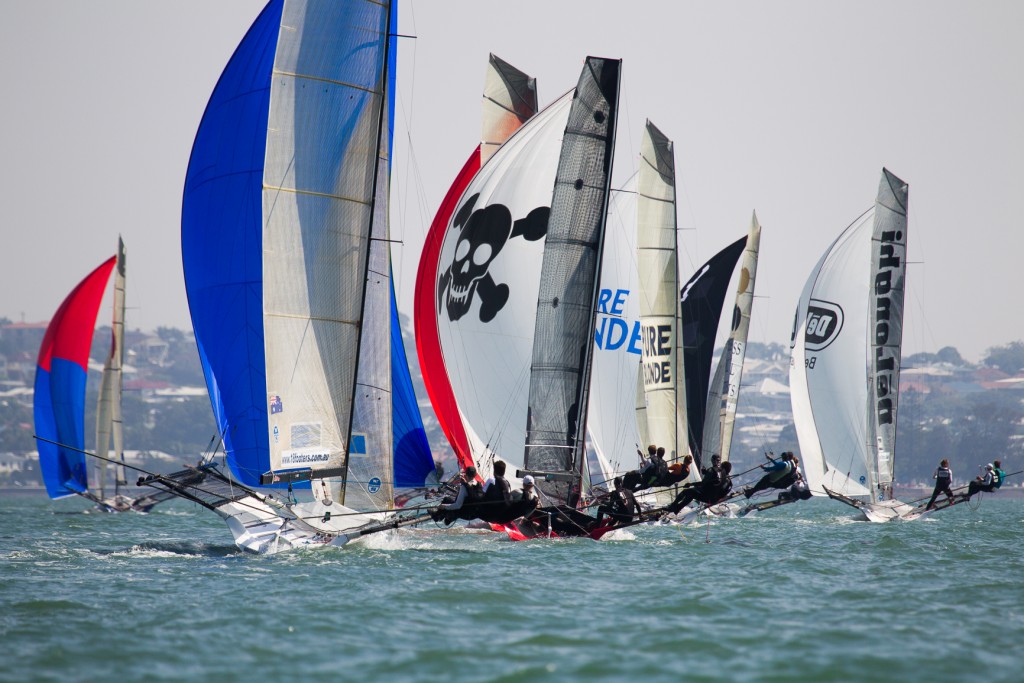 The 18 Footers today took to pristine Waterloo Bay, Manly, to contest the 2015 18ft Skiff Australian Championship. Under calm seas, crews dealt with warm weather on the first day of competition, and a moderate North-Easterly breeze.

It was a clean start in race 1, with Thurlow Fisher Lawyers maximising their move off the line to pull away to an early lead. Michael Coxon and his crew lead the fleet round their first leg of the course, only falling to Gotta Love It 7 in the last windward work. Gotta Love It 7 worked the shifts impressively in the building breeze to pass Thurlow Fisher Lawyers and win on the line. Tactical sailing out wide, on the left of the course, saw the Mojo Wine crew pick up three places but it wasn’t enough to get ahead of Pure Blonde who finished in third. 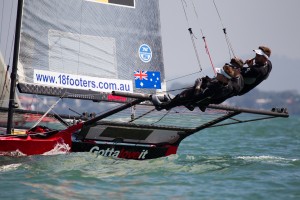 Shifting winds ahead of race two meant a shortened course from race officials. The wind had now swung more to the north and strengthened to around 12 knots with gusts reaching 14 knots at times. While there was drama on the start with DeLonghi capsizing, it was Gotta Love It 7 who built on their impressive form in race one to lead off the line with unmatched boat speed that saw them sail home unchallenged. Thurlow Fisher Lawyers again put in a strong performance ahead of Mojo Wine, in tricky sailing late in the day, to make up the placings. Tide became a factor in race two, with a few crews making contact with Waterloo Bay’s renowned muddy bottom. 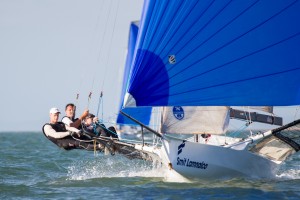 Smit Lamnalco sailed the best of the three local crews, using their local knowledge to sail to top ten finishes in both races, with Queenslander and Tradelink sailing down the fleet dominated by the Sydney League boats.

Tomorrow is sure to be an exciting day of sailing out on Waterloo Bay, with Gotta Love It 7 seeming almost unstoppable in their quest for the 2015 18ft Skiff Australian Championship. Three races will be run tomorrow, with competition set to get underway earlier in the morning, to maximise conditions.