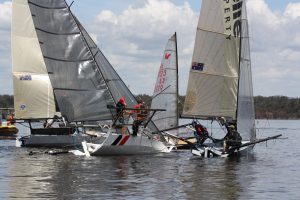 Warwick. What a superb weekend!

The Warwick Sailing Club invited the Brisbane 18 Footers up for a two-day regatta on the beautiful Leslie Dam. It was the first of several ‘away’ regattas for the season. There wasn’t a lot of wind to speak of, but it didn’t dampen our spirits.

Four 18’s, two 12s, four historic 10s, one Flying 11, a sabot and a partridge in a pear tree made the trip up the range for one race on Saturday and two on Sunday.

The first race was a gentle drift around the buoys in 0-5 knots. Laurie arrived at the last minute with no crew. Luckily a local moth sailor, Brandon and his dad gladly leapt at the chance to help him out.

The race was a graceful, slow motion tactical chess game as the boats chased the wind around the dam. Yoda’s 450 years of experience proved too much for the young Jedi’s and Darryl easily won the race after getting his eye in after also having won the historic 10s race previously.

Sailtec came in second with Queenslander pulling in a respectable third. Laurie, like the born teacher he is, taught the locals how to right a capsized skiff, accompanied by much cheering from the onlookers.

“Man, that boat is hot! Why are we burning a boat?” I slurred.
“It’s a sacrifice to appease the gods to rid us of bad joo joo”, Adam informed me.

The old Pacer’s timber and resin burned a heady brew of ply, paint and fibreglass into the night air as we discussed the origins of the boat burning tradition. Perhaps an ancient club commodore was hard of hearing when they asked him to bring a sacrificial goat.

And, it all went downhill from there.**

A hearty breakfast and strong coffee cleared the heads on Sunday as we prepared for another light day on the dam. The wind dropped to -3 knots, so we decided on a beach-start race. The Moth and three 18s crews held their boats waiting for the start gun. Not much sabotaging happened. On the gun everyone scrambled into their respective boats. With no wind for steerage, all three skiffs converged on the Moth and he was squashed in a tangle of wings and tiller extensions.

Queenslander had a secret weapon and paddled out of the mess. (The rulebook was scrapped for this one.) They rounded the first mark, hoisted their kite and the ‘wind’ swung around head-on. Sailtec managed to find a paddle on the rescue boat and paddled past. As the two boats drew closer together, Michael and Paul jumped off Queenslander to sabotage Sailtec, while Schmittmann from Sailtec stealthily swam under Queenslander and tipped her over, snapping the tiller extension in the process. She turtled and it was race over for the Queenslander boys. Not sure what Jenna Cairney, the local newspaper reporter thought of the whole affair as she watched from Sailtec.

Meanwhile Dashco Builders, without any secret weapons, managed to create some breeze (a beans and beer combo suspected) and sailed past the two wrestling crews, leading the race home.

The second race had a similar story, except with a new tiller extension and less jumping ship. Experience clearly shone though again in the light airs as Darryl cleaned up yet again.

Gerry Roche (Warwick Sailing Club Commodore and shenanigans ring leader) and all the people at Warwick Sailing Club made us feel extremely welcome and we had an absolute ball. The facilities were great and atmosphere was warm, especially when that boat was on fire!

Thanks to all the 18 Footers’ support people – Christine, Paul, Chris, Bruce and Rick. It was a well-organised and unbelievably fun weekend.

** What happens on tour stays on tour.