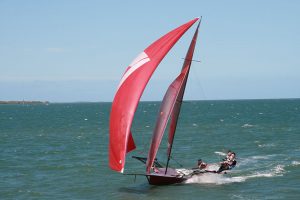 A mild day and flat bay set the stage for the first two heats of the Queensland State Titles 2012. Four boats rigged up on the lawn for the 3.5 lap windward return course.

There was much frenzied stealing borrowing of gear from Bluewave and KND Digital as they struggled to make the start. KND Digital (the former legendary Avaya) has had a huge face-lift in the past few weeks and needed all her systems put back together. KND had further drama on the way to the start when the new tack takeaway system proved to be too tight and pulled the kite out of the bag and under the boat ripping the kite.

Q1’s big rig (by big we mean, can-see-from-space, big) was too powerful and well-sailed by Daniel, Alan and Baz and they took line honours.

Q1 nailed the start and extended their lead up the favoured right-hand side. It’s rumoured that Laurie may have had a swim or two while Bluewave broke a mainsheet on the way to the start line.

Race 2 was a much closer affair, with APC getting the jump on Bluewave with Q1 and KND close behind at the start. APC led at the first cross with Q1 getting through Bluewave into second.

Bluewave and APC overlaid the top mark, allowing Q1 to snatch the lead. (APC went far enough to come back with Kiwi accents!)

APC did some more exploring on the final lap, taking a depth reading on Green Island and cracking their centerboard. The KND boys weren’t even in the running without a kite, so they used the day to test their new systems (and hoon around the bay like maniacs).

Q1 went on to record another win, with APC 2nd and Bluewave 3rd. Adam did well on Bluewave (current state champion) to induct his two new crew members Arno and Mitch, who had only raced one previous race together.

Onboard video cameras captured all the excitement as you can see by the great highlights video.

Catch all the footage on the Brisbane 18 Footers YouTube Channel – http://www.youtube.com/user/Brisbane18Footers