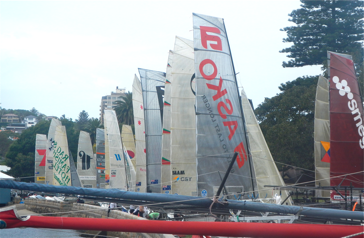 On the weekend of 1st/ 2nd December Shane Smith, Shane Dickson and Jake Restall took their 18’ skiff on a road trip down to Sydney to measure their progress against the best in the country. This weekend was the first of a few major steps in the preparations to compete in their first attempt at the JJ Giltinan’s Trophy in February 2013.

As a team we have been training hard on the Gold Coast and racing in Brisbane with a pretty successful score card but we were under no false illusions as to the challenge ahead of us. The plan was simple, go down, test ourselves and the equipment, put on a good sample of what Queensland skiff sailors have to offer and learn as much as we can about the boats and what makes them go fast.

A long road trip on Friday night and we arrived at the club in Double Bay for a training session to get use to the harbour and traffic as this was going to be the biggest change to our current racing. It was a perfect day for heat stroke, tanning or taking a dip as it was a blistering 38 degrees – the hottest beginning to December on record for Sydney. This didn’t provide the best sailing conditions with light swinging breezes but we made the best of it to use our #1 rig which has seen little use of late.

Sunday – Race Day came round and the heat wave of the day before brought a storm and with it a southerly change so breezes were up gusting to around 20knots early but tended to ease as the morning went on leaving the tough choice of which rig to use. We were one of the first to put in a rig, choosing to run with a #2 rig and a few followed suit soon after but it was fascinating to watch the games unfold as a big standoff amonst the big players followed. At the ends of the rigging park the teams of Gotta Love it 7, Thurlo Fisher, Yandoo, Smeg and Asko ran a 2 rig, the middle of the park went for the 1 rig leaving it a 50/50 call on what was going to work.

Into the race we settled on the line and actually held our own very well at the start but struggled for height falling away to the experience of the fleet so a short tack to clear air and picking the next two shifts we found ourselves in third spot and very competitive with the big names of the fleet as we progressed up the work. Being a three – buoy race we had the advantage of inside marks and rounded in second much to the surprise of most and a clean set and gybe had us blasting away from the traffic and chasing down the crew on Rag!

By the bottom mark we had made gains on the leader, extended on the pack and really focusing on settling into a groove to keep our nose in front of the chasers. We managed to do this and continue to push the race leader rounding the top mark for the second time in the lead. Another gybe set and the boat was tearing up the race track as we approached the half way stage. This is where the pressure got the better of us a little and had our path blocked by the spectator ferry forcing us to do additional gybes and compromise our approach to the bottom marks. This lead to our undoing as we came in very square and stalled the rudder hitting the mark as we rounded it and being more than a bump we decided to do our penalty turn and get into it.

After completing our turn we were back in fourth but cleared our heads and got on with the chase. The new race leader was Panasonic Lumix followed by Rag and Kitchen Maker’s and we were about 20 seconds behind in fourth after our bottom mark issues. Clear heads allowed us to use the next two wind shifts well and we made gains on the downwind and passed the Kitchen Makers, and rounded inside Rag to move into second place with a lap to go and with the margin less than 10 seconds to the leader we were going to be very hard to hold back.

Into the last lap we pushed Lumix and closed the gap but having the inside mark advantage on the last lap we were able to pass and open a little gap for the run to the finish and everything just played into our hands as we sailed to victory in just under ninety minutes. The sound of the winners horn as we crossed the finish and the spectator ferry cheering and a little confused with who we were was a great feeling and a shake of the hand had sealed what was a very successful weekend.

We were unofficially the winners of heat 7 of the AEG 3 Buoy Challenge and very much enjoyed the experience but under no false illusions that a scratch race would not have seen the same results but we were in the ball park and more than holding our own.

We now have more work to do on the boat, our fitness, and sailing technique as today was not our best performance due to the pressure of the race and the pressure we put on ourselves but this will only get better as we more to the goal next February.

I would like to thank our sponsors Winning Appliances, Gill, Sail Racing Solutions, Sports Super Centre and the Australian 18 footers for allowing us to compete. Also big thanks to the boys Shane and Jake for an awesome weekend – well worth the effort!

Look forward to this weekend back in Brissy….see you there!