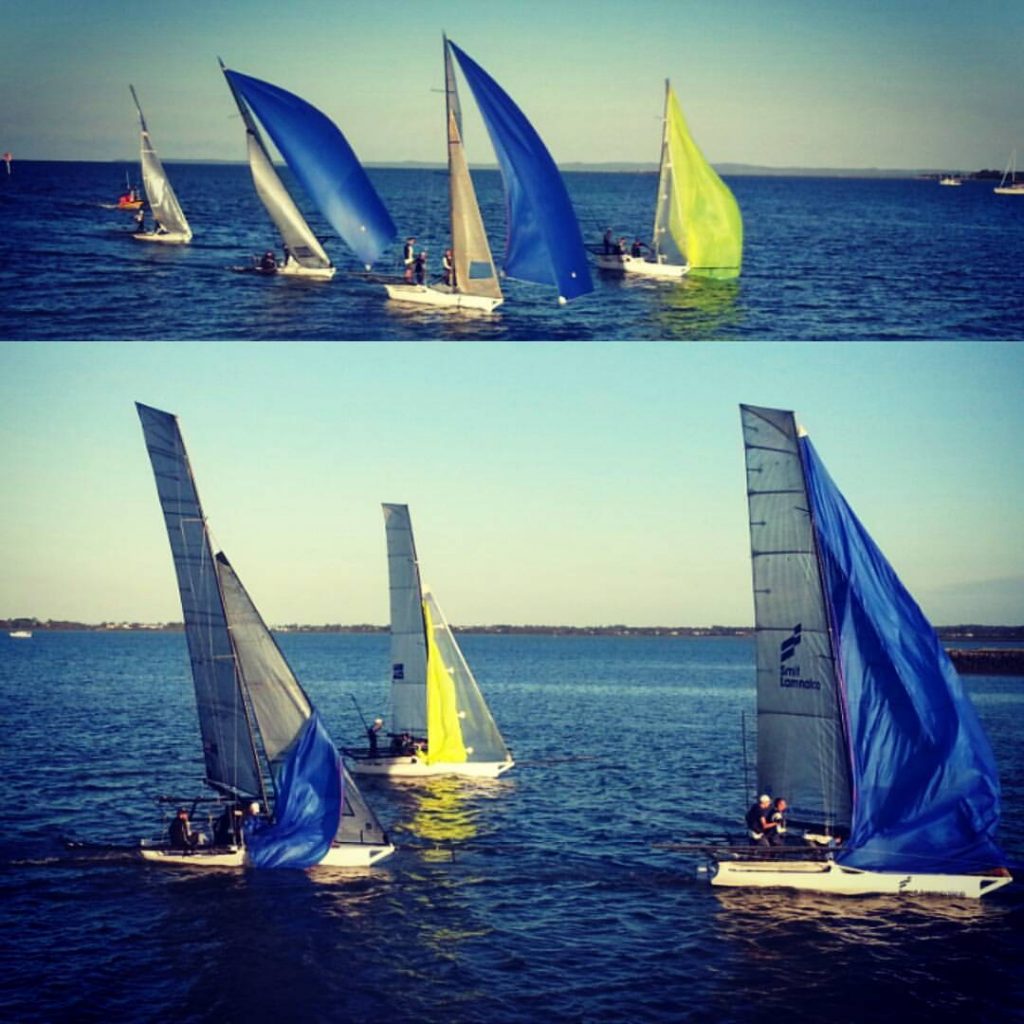 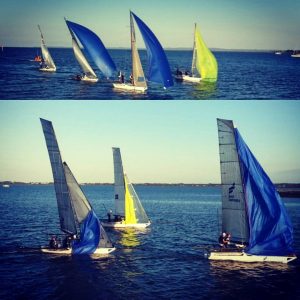 The 2016 Queensland State titles for 18 foot skiffs has been won by Team Ullman skippered by Laurie Williamson, with current  i14 national champion David Hayter and Skiff-gun for hire Elliott Mahar with a result card of 1,2,2,1,1.  Second was Smit Lamnalco sailed by current 12 foot skiff Queensland champion team of Paul O’Malley-Jones and Steve Tapsall who had a different forward hand each day, being Phil Manning and Angus Barker (3,1,3,2,2).  Third was regular 18foot skiff team Pandeo , Ben Somerville with Cameron Smith and Quentin Palmer who suffered boat damage on the last day and were unable to compete the last two races (2,3,1,DNF,DNS).  Fourth place went to first time campaigner Jono Anderson sailing with Goura Whitehurst and first time crew Matthew Hatton (4,4,4,DNF,DNS) aboard Winning Appliances.

A patchy 5 knot easterly greeted the boats as they made their way to the start line for race 1 on Saturday. With the race briefly delayed while the wind direction settled into a true easterly.  The light airs meant the boats were all evenly matched in the boat handling department, racing was expected to be close. All the boats were away clean at the start with Williamson attempting to shake things up with some very erratic steering, obviously trying to bluff and muscle his way onto the start line. Smit Lamnalco would have none of it and got away best followed by Pandeo.  Team Ullman were buried and had to tack out early as did Winning Appliances.  One and a half on the wire up the first work saw the lead change numerous times. By being on the correct side of a late shift saw Pandeo come in on port tack and round the top mark first, closely followed by Smit Lamnalco then Team Ullman.  The wind dropped for the downwind and it was one on the wire sailing.  Staying in the wind proved beneficial to Smit Lamnalco as they rounded the bottom mark first with a small margin over Pandeo.  Both Team Ullman and Winning Appliances found their way into but not out of a sizeable hole.  Covering tactics ensued as the wind slowly lessened.  The decisive split came when Pandeo used the start/finish exclusion zone to their advantage and were able to split from Smit Lamnalco and head towards the right side of the course where Team Ullman were picking up the new breeze from the south. At the top mark Pandeo held an advantage over Team Ullman.  Pandeo gybed for pressure on the left while Team Ullman stood on to the right.  The committee boat signalled a shortened course for the race to finish at the bottom mark. Pandeo gybed to cover Team Ullman but were overtaken.  At the finish, it was Team Ullman followed by Pandeo, then Smit Lamnalco and finally Winning Appliances.

Race 2 on Saturday had a bit more wind and the start line set for a south easterly.  As was the want of the breeze the wind swung to the east just before the one minute gun. The start saw some “exciting” manoeuvres as Williamson first aimed for a port start off the pin then sensibly decided to duck the fleet as the fleet all tacked on to port.  The wind steadied in direction and strength and racing was by the numbers for the first two laps with the order being Smit Lamnalco, then Pandeo, Team Ullman and finally Winning Appliances.  On the last lap a fresh line of breeze was picked up by Winning Appliances who almost caught the two immediately in front.  Team Ullman were able to take advantage of the new wind and snuck past. Pandeo.  Smit Lamnalco took a comfortable win.  15 seconds separated second to fourth places. 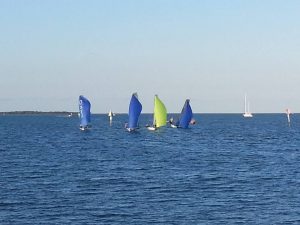 Sunday saw 10 to 15 knots greet the crews.  Boat handling would contribute significantly to the days racing.  Pandeo sail regularly during the season and this showed by winning the third race of the series, although they didn’t have the race all to themselves with the lead changing numerous times early in the race.  Their coordination showed in the end with fewer dodgy manoeuvres, Team Ullman did stay close enough to keep the pressure on.  O’Malley-Jones and Tapsall with new to the class forward hand Angus Barker had a few moments but remained upright for third. With two races remaining, two points was the spread from first to third place, the championship would come down to the final two races.  The discussion on the beach while rigging centred on which rig.  The regular sailing experience of Pandeo said big rig.  The green crew and no time together of Winning Appliances said small rig. Team Ullman having a few seasons experience between them sailing 18’s and other skiff classes were happy with big rig. With Tapsall having more experience in 18s (although 20 years ago) then all the other crews Smit Lamnalco also were happy with the big rig (kind of). All boats strapped in the big rig. Race three had been sailed in 10 to 12 knots, by the start of the fourth race the wind was a constant 15 knots.  This was too much for Winning Appliances and they headed for the beach after a few swims at the bottom mark.  During the second upwind in the fourth race Pandeo were holding a handy lead when a trapeze line broke and dropped Somerville in the water, this resulted in a broken tiller extension.  Despite their best efforts to continue, their regatta was over. Team Ullman and Smit Lamnalco continued to swap the race lead until Team Ullman hit the lead at the final hoist while Smit Lamnalco had a few goes at bearing away. Race five looked like being a cracker match race.  First and second places in the championships were all but stitched up. The two boats and crews, although not the most coordinated, had been similar in speed during the day. The start was as it had been all weekend with Smit Lamnalco getting off the line better however that was the last of the close racing. During the first tack Smit Lamnalco capsized when the tiller extension separated from the tiller.  5 minutes and half a roll of electrical tape later they were upright and going again, but by this time Team Ullman had a sizeable lead and went on to win comfortably with Smit Lamnalco crossing the finish a few minutes later.

In all; a great weekend racing.  See you all next season.

6 years ago News and Events
See All Posts