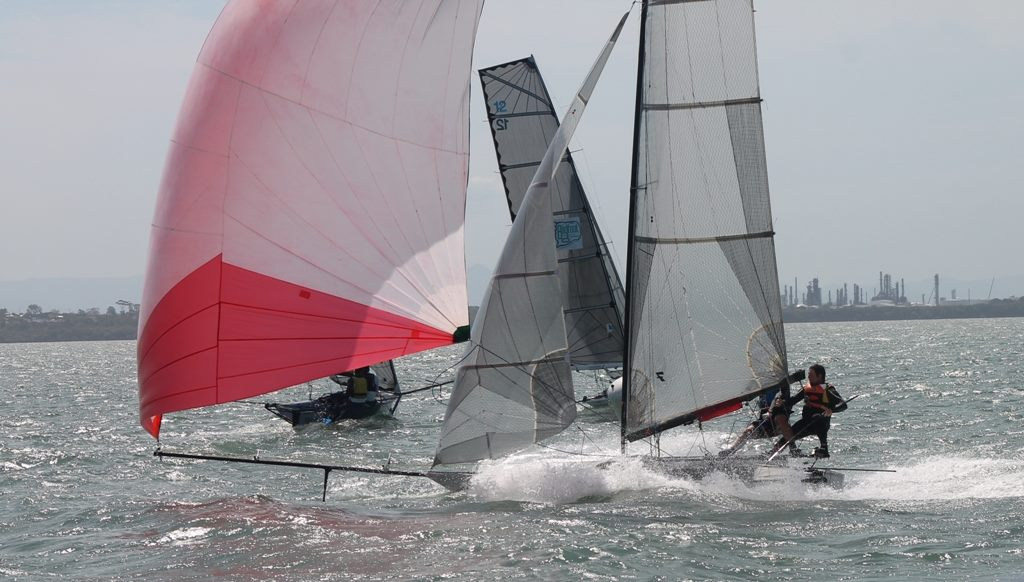 Another glamour day on the bay clear blue sky, 15 knots NE, incoming tide and flat water. I think God is shining on the Qld 12s.!!

Wind was steady and a foot of main was eased. Super speed time with the second rigs on Waterloo Bay. Craig on the newly rechristened “Scum and Villainy” had a few mast track issues so missed the first race. Giddy Up with uber fill-in Shaun and Ghetto Sled lined up for Opening Day match racing.

The gun went with Ghetto getting Giddied out to the port corner and then coming in fast to the top mark. Only metres in it. Kites up and we shot off down towards the channel, where there was a laid-up sand pumping dredge, taking a break from filling up the GC with soft white stuff like a dealer. Giddy Up leading, but only just. Clean run down to the bottom mark but Paulo under shot and had to gybe back. Not-so-nervous moments on the Sled as we knew his Starboard calls were bluff as he was going to gybe around the mark. Dial down not required. Up the next work covering was the name of the game. No ground was gained nor lost.

Second run and the Sled found a low groove and got the inside lane. 50m lead by the bottom, then reverse the cover game up the last work and a quick dash under kite to the finish. Nice racing Paulo.!

A different dynamic with Dr Dancer flashing around the place, living up to their name. Scum and Villainy took off from the pin low and fast, which has become Craig’s trademark start. Giddy Up and Ghetto racked up behind somewhat more conservatively. Craig found the vang and wound up to a place near the corner that he thought he’d be able to cross. But a slow tack led to some hurls of abuse from Giddy Up “STARBOOOOOOOOOARRRRRRRDDD!!!!!!! AAAAGGGGGGGGggghhhhhhhhhh!!!!!!!!”. I think they got the point. Giddy ducked the surprised Scummers who earned themselves a turn. Then Paul had to tack and received the same and then some from the Sledders. “STARRBBOOOO…” you get the point. Paul respectfully ducked and it felt good to unleash some fury after a long winter.

Drag racing recommenced to the top mark with the Giddyers winding up in front of the Sled and the Scummers tacking a bit early and pinching their way to the mark. The Sled took the opportunity and jammed a tack right on them within a metre of the mark. Result was Craig’s bowpole finding the gap between the mainsail and boom. Fortunately, the tack was good on the Sled and we shot out before Craig’s ‘scalpel’ sliced and diced the threads.  Turn for the Sled…

Craig seemed well enough flustered at this point to prawn the kite and swim for the next 10 minutes. Gave it in and had a few sends through the Opti fleet to ensure the future of the 12s is secure.

Race was on between the Giddyers and the Sledders, heading down to the dredge again in a dying breese. The Sled gained as once again Paul undershot the bottom mark. The RQYS fleet was overlapped around the point Paul gybe/gybe dropped and it all got too much for Shaun “never used a kite bin” Thompson and over they went. Game over and we just enjoyed the sail from then on. Bit of fun was had on the Giddy Up after the race with joy-rider Kynan falling overboard whilst going 3-up.

Thanks for the volunteer support.