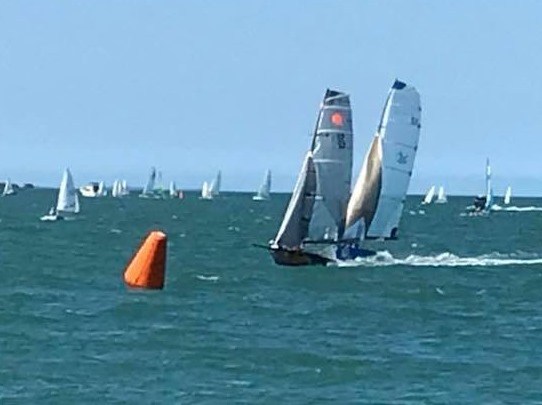 And so the sailing season has begun.

Saturday saw the 12’ skiffs commence the season at the 18footers opening day hosted by RQYS.

Two of 12’s rocked up ready to rumble; Giddy Up and Carbon Chandlery.  The 18s were not completely without representation as Steve and Paul plus Jack and Josh put an 18footer on the rigging lawn.  Like moths to a flame we had 8 people help us get the 18 off the trailer… there is some interest there. 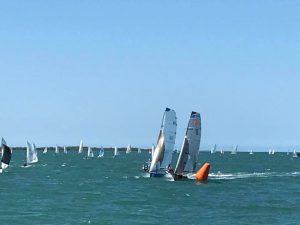 Anyhooo, back to the racing..  At 11:45, Richard was concerned that Crossy was not at the club yet.  After 24hours of abstaining from looking at his phone, Richard had a sneaky peak and the news was bad.  Crossy had spent the last day and a half evacuating his innards and although now down to racing weight and beyond, was otherwise unfit to leave the house.  Tapo did his usual thing, put his hand in the air, exclaimed that he was looking for a crew  for a 12 skiff and 3 people lined up.  The disappointment on the faces of the two who were sat out was heartbreaking.  Welcome to the class Scoobs.

Paul and Tapo chose early and slotted in big rig, Richard and Scoobs weren’t so sure and bolted on the second rig.

Out we all sailed and arrived at the start line in a lovely 12-15knot nor-easter with about 100 boats of all classes milling around the start line.  After a few postponements the 12s started with about 123 lasers on the same line.  The Giddy Up were smart/conservative and started about 1/3 of the way down the line with all of the laser fleet between them and the pin.  Carbon Chandlery were daring and started about ¾ of the way down the line….on port…  in among the lasers, all on starboard.  As only a national champion is able to command, there was a 12 foot skiff size hole in the laser fleet and Richard got through and off he sped to the un-favoured right side of the course.  The Giddy Up weaved her way through the lasers out towards the left.   Aboard the Giddy Up the big rig was nicely powered up and charging. Aboard the Carbon Chandlery, the second rig was a bit underdone, particularly on the un-favoured right side. When the two converged again just short of the top mark lay line, Giddy Up was able to drop in a lee-bow tack. It was then pinching all the way to the top mark.  With a slight increase of wind closer to the mark the 2 rig was able to lift up off the hip of the big rig. Carbon Chandlery then rolled Giddy Up and squeezed around the mark first.  Up go the kites and head back towards the starting area instead of out towards the wing mark. Cracker ride, not much in it, but the wily old heads in the Giddy Up were able to sail higher with the big rig than the excited newbie with a second rig.  With the kites dropped it was then two sail reaching to the wing mark, Carbon Chandlery about half a boat length in front of Giddy Up. Then the tactics commenced, Giddy Up ducked down inside and had an overlap, Carbon Chandlery ducked also to try to outpace and break the overlap and succeeded. Both boats now playing cat and mouse games while sailing flat out at the death angle – main sheet does nothing now just hang on and hope.  Either by stubbornness or luck Carbon Chandlery maintained her rights and cleared the wing mark about 500mm in front of Giddy Up.  The second rig on Carbon Chandlery gybed easily. 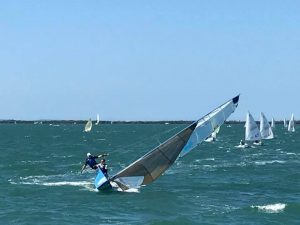 The big rig on Giddy Up refused to gybe and the first capsize of the season occurred in front of the plenty full spectators on the plenty full spectator ship.  Wing mark to bottom mark was again tight, but sailing back towards the un-favoured right side of the course.  Carbon Chandlery quite wrongly two sailed and began running out of pressure, the Giddy Up knowing that glory doesn’t come to those who don’t have a good story to tell if they fail, hoisted the kite and significantly reduced Carbon Chandlery’s lead by the bottom mark.  One windward return and a short work to the finish was all that remained.   Carbon Chandlery headed right, Giddy Up headed left.  Somewhere up the work, Richard decided it was time to finish off the winter maintenance and parked the boat and got out the electrical tape and note book.  Giddy Up unaware of any issues arrived at the top mark with a handy lead. Up go the kites.  Gybe at the lay line, short reach, drop kite, round the mark and tighten sheets for a straight line close haul to the finish line.  Easy… for Giddy Up it was, for Carbon Chandlery it was anything but.  As everyone knows, hobie 16s don’t point too good.  Where Giddy Up had made the finish without tacking, and Carbon Chandlery was looking to do the same, three hobie 16s had to make 5 tacks each and were co-ordinating to make life aboard Carbon Chandlery horrible.  The first h16, on port, rolls down over the top of Carbon Chandlery, Richard bears away, then the second h16 this time on starboard calls starboard, h1 commences tack, so Richard ducks harder to avoid h2 as there was not going to be a repeat of big holes like at the start line.  In so ducking, Carbon Chandlery has missed the finish mark and h3 sails over and commences yelling insults at Carbon Chandlery about not doing the course correctly…

Back at the beach it was smiles all around with a relaxing rumbo.  There were tears from a few speculators/ old timers and the like, leaning on the 18, and telling long forgotten stories of how they were once good on an 18 and how it will be good to see them on the water again. That is the plan we told them.

The results below have been copied directly from the RQYS site and as you can see, the 12s have top billing.  That’s the way it should be.

Next week it all happens again.

photos by Sloman and Webb. 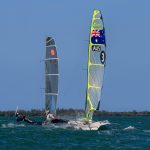 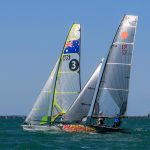 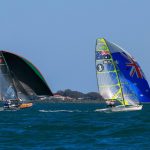