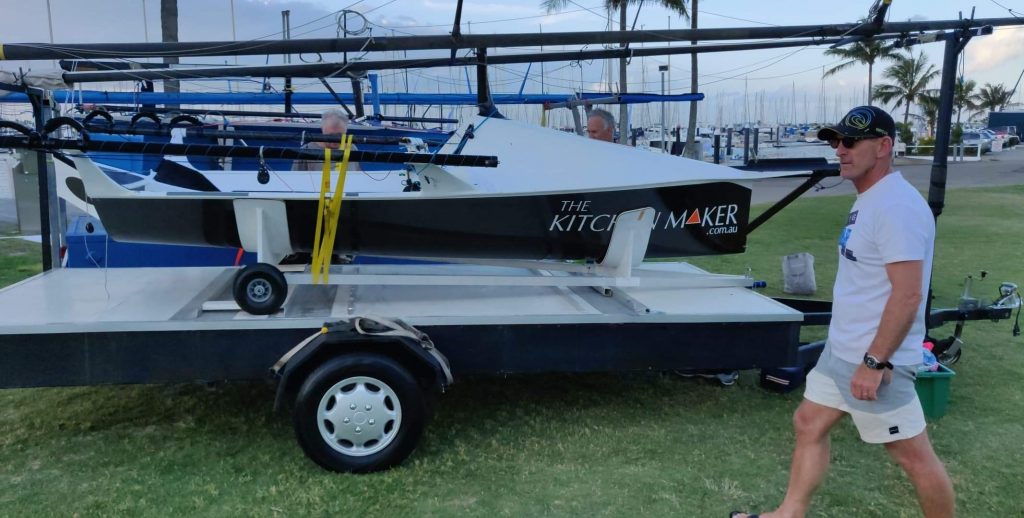 The Noosa Triathlon weekend decimated and shook the 12s fleet.

Three boats lined up on the start line; Ghetto Sled/ Carbon Chandlery with usual team of Rich and Crossy, Giddy Up with Paulo taking Angus on board as both had lost crews to Noosa, and Kitchen Maker with Pete teaming up with Waynie. 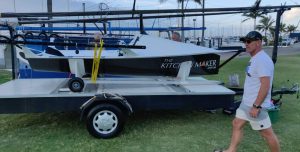 After a postponement when the breeze swung about 40degrees in about 10 minutes, the first race was underway.  The wind had settled into NNE at about 14-16knots and everyone had 2nd rig on board.

The Sled and Giddy up hit the line hard and fast and separated by about 10m along the line.  The KM’s were still sorting co-ordination and crossed the line after a short pause.  Up the first work it was neck and neck Ghetto and Giddy up, loose covers the order of the day. Three quarters of the way up the work, Giddy Up hit the go-faster button and put a gap back to Ghetto. Around the top mark Giddy Up held the lead.  Up go the kites in flat water under Green Island and an electric ride before the bumps started.  Both boats gybed at the same time. For Giddy up this meant they were low of the bottom mark gate, for Ghetto, they were right on target and lead around the bottom mark. This time everyone went right.  Although 50m apart, Ghetto missed the wind shear and were low pointing while Giddy up were high pointing in more wind. Ghetto tacks and crosses, Giddy up holds course out to the right.  When everyone tacks and crosses again, Giddy up is back in front. Then it was Ghetto Sled’s turn to presses the go-faster button and gaps the slower moving Giddy up.  Around the top mark, kite up and down to the finish.  An early gybe on Giddy up wasn’t enough to close the gap and Ghetto took a comfortable win.  A look back up to the top mark and Kitchen makers had their kite up and were on the ride of the day.  The boat was leaping , spray going everywhere… ignore the finish line.. through the southern fleet all the way down to Lota creek.  They went home from there as the process of pulling the kite up had chewed out every pulley in the boat.  “One last ride is all she has captain”.

Race two commenced similarly to race one, 10 m separating the boats on the line, except this time there were a few 9’ers policing the line as they do.  No issue for either boat. Both fast off the line.  Tack for tack and loose cover up the first work. Giddy Up in front of Ghetto at the top. Early gybes on both kept them out of the way of the performance trailer boats and one tonne one design yachts. Giddy up first around the bottom mark gate.  Still anyone’s race for the taking and then both Rich and Benny decide to rest in the water while the boat tried to keep going.  There was no capsize (they did that two tacks later) but this let the gap open up.  A very loose cover by Giddy up was all that was needed to round the final top mark with a healthy lead which they held to the finish.  Final score?  One each.

And then we hit the marina with about 127 lasers, roughly counting.