After the epic logistical task of getting Tank Girl finished, then to Sydney and onto Wellington, we arrived to find it blowing 45-50 knots and looking to stay that way.  Ideas of a practise sail withered as we watched the wind lift whirls of spray off the sea. 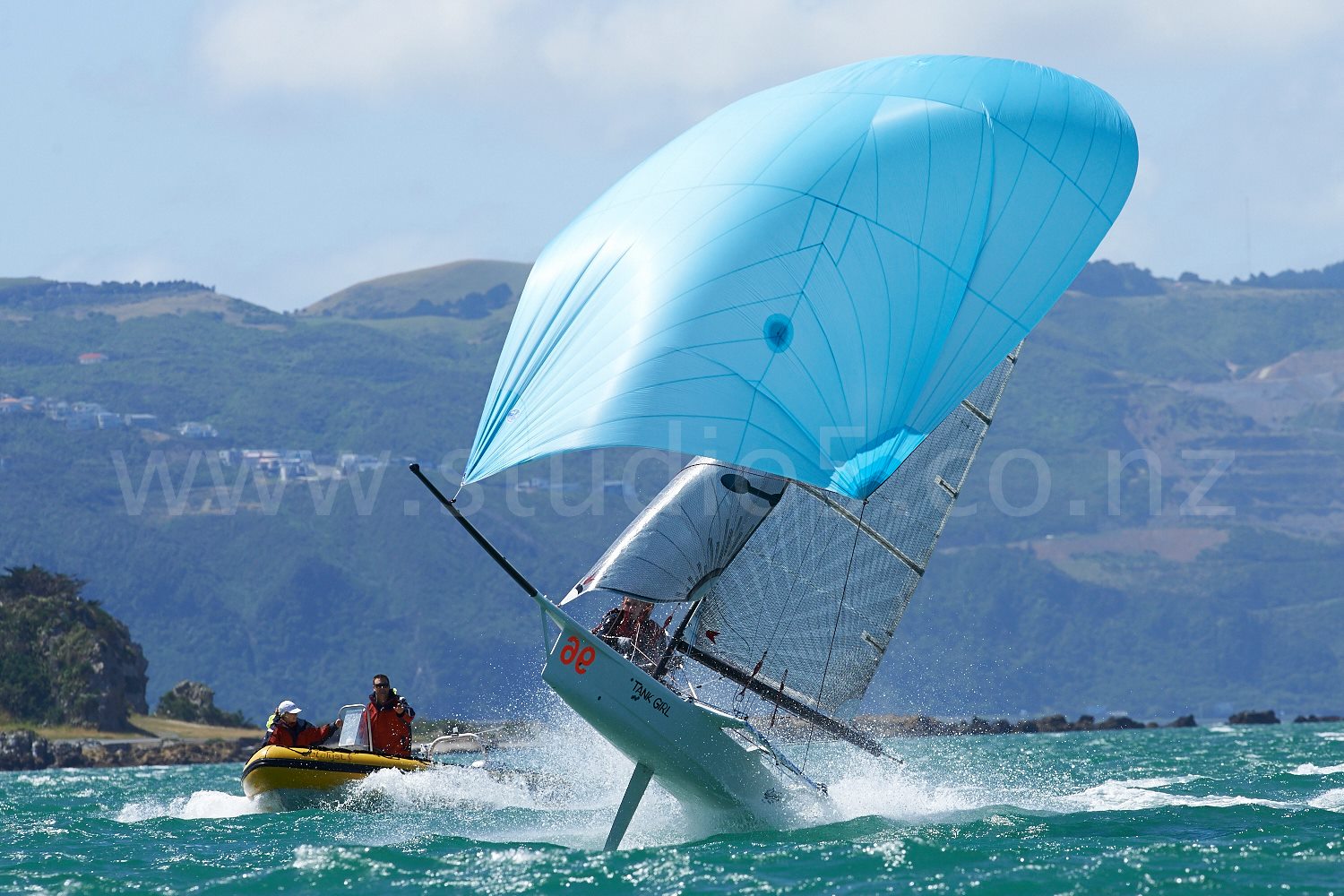 Saturday was looking pretty marginal for the orientation race, so a buoy was set and those who chose to could do a ~500m speed trial.

We went out to get a handle on the conditions.  Turns out it there was a lot more wind offshore, the gusts hit really hard, and our clothes and gear worked reasonably in the conditions.  The conditions were pretty humbling.. we lasted only a few waves with the kite up before we mined.. a gust hit so hard and fast we barely knew what happened before the foredeck was under water and the rudder in the air.  Our ‘speed trial’ took some time as Craig recovered on the centreboard, winded from hitting the water. 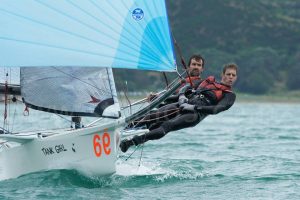 The regatta had strong North- NorthWesterlies until a strong South – Easterly came in on Thursday.  This was different to the usual Northerly and southerly breeze.  The Northwesterly was gusty and shifty, and the Southeasterly put the clubhouse on a pretty treacherous lee shore (and freezing cold!).  The forecasts took some getting used to – for example ’15 knots gusting to 30 during the morning rising to 45 knots in the afternoon’  was pretty typical.  How, exactly, do you rig for that??  You know there’s a bit on when you’ve got 4th rig up and both sails are ragging!

After Saturday’s experience the Aussies were a little shy of the conditions and we all went 4th rig – the better Kiwis went 3rd rig.  As the regatta went on our racing got better as we became more familiar with the boat.  We had a few good races – two sevenths and two ninths seemed to understate the actual races.  Saturday morning was our best race, holding on to 3rd-4th place until the run to the finish, when the fluky big rig conditions didn’t work in our favour.

Tank Girl caught many people’s interest, and Nick Press took her for a steer.  Reido was keen but too tired after racing.  After a few days of racing, a boatspeed advantage was noticeable, and others also noticed.  It was just the clowns on board and a few messy systems letting us down.  It was great change to have pace.. all the rigs worked well, but the 4th kite is a little too sniffy for lumpy seas.  The big rig was particularly quick in Saturday’s conditions, and we overtook a boat to leeward once, low groove to get below and past, then high groove climbing back above.  The last race we passed half a dozen boats on one beat after a capsize.  Reido said if we got a decent start he would see our forestay climbing first from the pack.  After a bit of a sketchy start to the regatta, we could often stick a race together in the windy stuff as well as the lighter.  Ironically, our well used second kite setup caused us the most trouble!

As usual, the top boats were very close and hard company to stay with.  While our pace helped us stick with them, any small mistake and they would leave you behind.  Russell has been sailing three times a week all summer, and Glenda and Reido were practising just as much.  Reido’s boat was immaculate as always, he had a new big mast which was very cool.

For the Aussie team to have had any chance we needed four other boats as fast or faster than Nick Press.  The results show this pretty clearly – these boats were 1,2,3,4,5 in every race.  (Ginge was first across the line in the race he scored OCS) Shaun Sheldrake was consistently just behind them with Jason and Mel also sailing very well – always comfortable in the fresh stuff.  Rockstar NZ newcomers Matt Stevens and Emma (Exonet) proved you won’t get far without practice in a 12.

Wolfy is sailing well and the boat seems fast.  The conditions have now earned him the nickname ‘Two String Pete’!  It was pretty insane chasing him to the finish line one day, both boats 4th rig two wiring, doing 22 + knots through the chop.  Murray and Brett sailed consistently, doing well to keep it together in the not-too familiar conditions.  Forbesy had a shocker towards the end of the regatta; boathandling issues, a broken spreader, and a short time ‘polishing a rock’ sent him to drink and some time with his family.

Ginge is so competent, especially in the fresh stuff, it’s ridiculous.  There’s not many people who can sail so clearly in conditions like that.  After racing was called off one day he stayed out for a few laps.. just to show how it’s done.

At the end of the day it’s great to have a boat that’s generally on the pace.  It’s a great starting point.  Apart from a few on-board systems which need improving, it’s all about practice and enjoying some time on the water from here.

Also a big thanks to the Kiwis for the great hospitality.. there were great accommodation options for everyone.  Our hosts Annika and Tim were great, it was a fun house to stay at (except for Tim’s experimental Quadcopter!).  Mountain biking along the narrow trails behind Wellington was magic in the evenings.  The laydays had many of us at Mel and Jase’s seaside escape for a rum or two and a bbq. 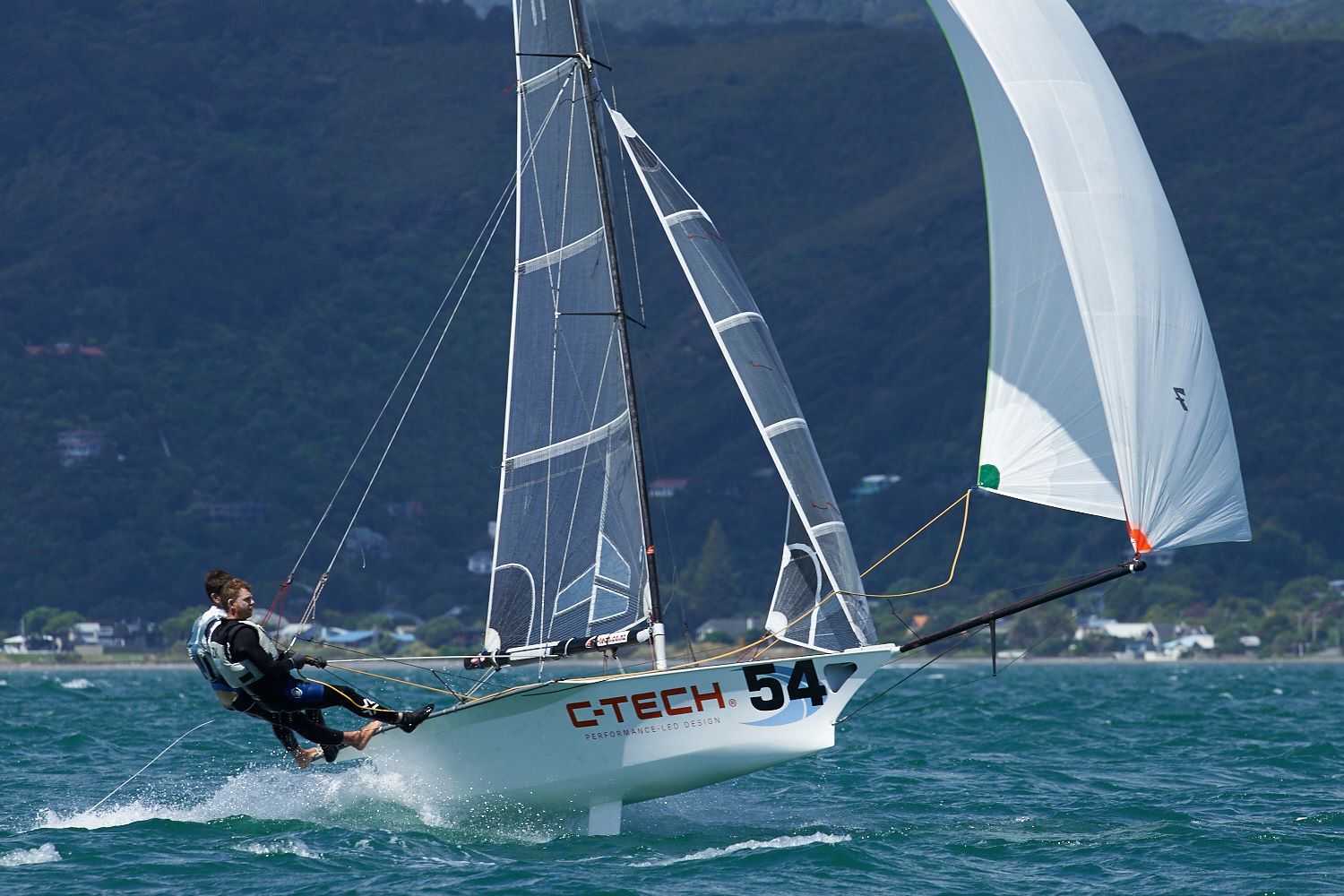