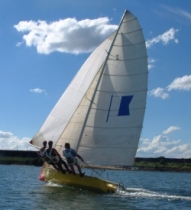 July 23, 2013 Author: Skiffie
While the current fleet are in “R&R” mode (aka do nothing until a week before the season starts), I’ve dragged out some of the old weekly race reports that Christine used to prepare and print out for the punters at our old Club house at Bulimba.  This race wasn’t the best for me, given we (Peter’s Gift)were one of the DNFs with a broken mast.

Mystery the Only Survivor in Torrid Conditions

The number 5 course was in effect for the 1st heat of the Queensland’s, they were going to the Boat Passage, at least that was the plan. The early afternoon promised bright and spectacular racing, however the freshening wind played a major role in the outcome. There were more baths taken in this race then we’ve had all season. 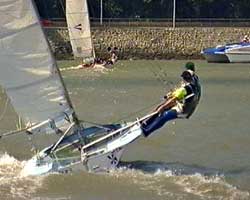 Mystery had the ideal rigging and crew for the conditions and was the only one not to capsize. As all were experiencing varying degrees of trouble leaving the ramp the start was delayed for a short while. Once they were all on the water the race got under way, with Peter’s Gift getting the best of the start to lead out of the Hamilton. Awesome swamped the boat just after the start running back up river and while it appeared they were pulling out when they came back to the club they were only draining her out, once emptied they headed back down river, in hindsight they should have come into the ramp. Meanwhile Hart R Tax, who was carrying their big rig, decided to retire after numerous swims, they had gotten as far as the Gateway Bridge. Mystery had overtaken Peter’s Gift to take the front position but had to run ashore at Parker Point to reattach the mainsail to the end of the boom.

The Gift took advantage of the situation to retake the lead. This was to be short lived when they capsized, unfortunately a tug was streaming up the Pinkenba Reach and they weren’t slowing down which alerted the rescue boat that maybe the tug hadn’t seen the Gift in the water so he started circling them to draw attention. By this time Peter’s Gift had started to right, once refloated they went to sail off, right into the path of the tug which had to back off and change course, only the Gift tacked and went back the other way. While this was going on Mystery had sailed through into the lead again but they too were having trouble as the strop on the boom broke and one of the main sheet blocks dropped off. As the remaining three headed into the lower reaches they met the blast of the fresh nor’ easter and Peter’s Gift became a casualty in the heavy blow, capsizing near the mouth of Doboy Creek, as they were standing, the mast gave way leaving them to drift onto the brick wall, they were towed home. This left just Mystery and Awesome in the race. 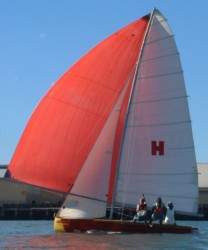 By the time Mystery had rounded the Boat Passage mark it had taken almost two hours to reach it, Awesome was approximately another 40 minutes behind but they came to grief as they neared the Boat Passage mark, losing their mast, the 3rd this season. With no one close enough to challenge them Mystery elected to come back under working sails only crossing the line to take the gun, the only finisher.

Only boat to finish.