With Heat 2 down to start at 11am, the fleet was greeted with a 15 knot southerly, slack tide and a small swell at the Colmslie mark. Again the fleet hang back at the start which was a broad reach up to Bulimba Point, only Avro was on the line at the gun. This morning most boats had gone for Number 3 rig, though Merle, Irene-M and Kismet stuck with their 2nd rig. This morning's course was No. 2, the same as yesterday, but without the middle leg from Hamilton Wharves up to Taylor Street before heading for home. Once round the Colmslie mark it was get back to the finish line, if you could.

Around the Point, Miss Marlene quickly hauled in Avro on the wind. Wrecker, with his small rig, was working his way through the fleet and quickly got amongst the leaders. Irene-M and Lil Imp rounded out the top 5. Kismet with his big rig was also making his move. Avro continued to slide backwards as more boats pushed through him.

With spinnakers set, Miss Marlene and Wrecker were in close company, after Wrecker led them around the Colmslie mark. Lil Imp with their (big) small kite were showing great speed downwind; Irene-Mset their second kite only to have problems when the loop holding kicker and brace to the pole let go and saw their pole in the water, which they luckily retrieved very quickly. This left them to set their 3rd kite which saw them overrun by two more boats.

By now the swell had increased and the boats were having trouble in the gusts as they were being driven by the nose. Meanwhile on Kismet, new for'ard hand, Hughie Dodds, set his first kite after having his kicker knot around the bumpkin yesterday. Good on you Hughie. This saw Kismet keep pace with other boats.

Miss Marlene kept her nose clean to the finish, winning by 39 seconds from Wrecker in fairly close company.  Both finished at the bouy end (northern bank), with Miss Marlene deciding to wash out the previous day's mud with another swim after the gun.  From there, Lil Imp, Truant II, Irene M and Avro were all charging down within cooee of each other, each finding different breezes at different times.  Of this pack, the photo finish was for 5th with Irene M getting up by 1 second! 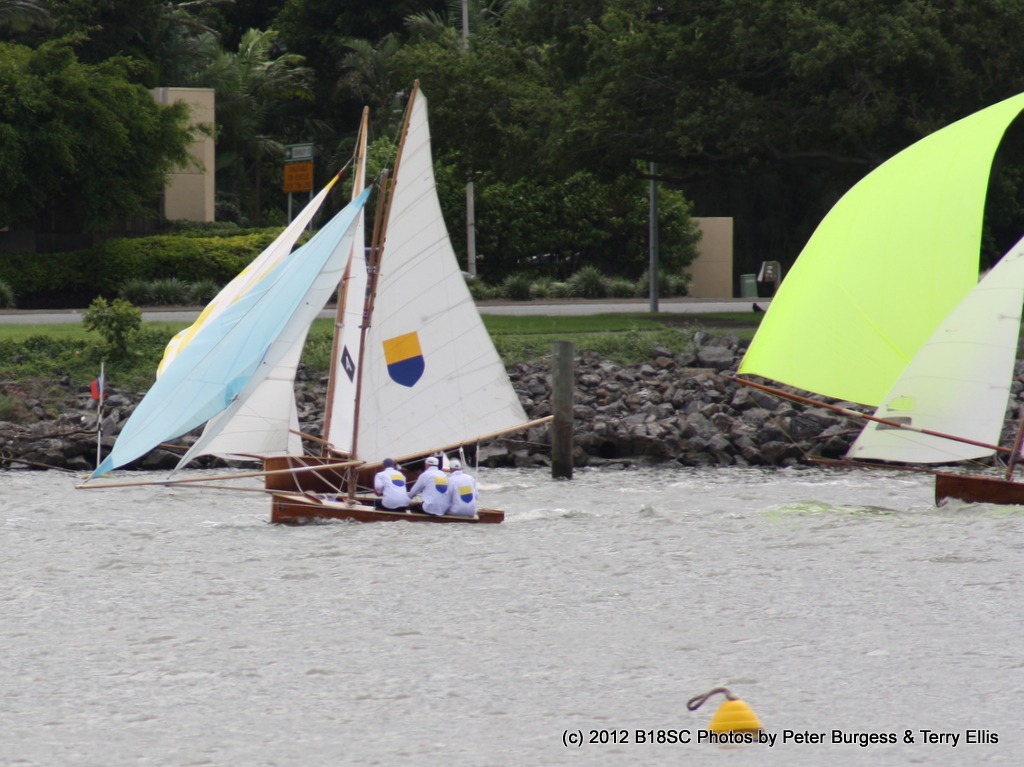