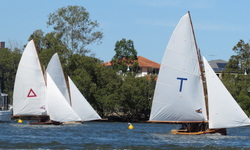 Courtesy of Peter Burgess from the NSW 10s.

A skippers meeting, held at 0900 agreed to do 3 races back to back, in order to get a result for the titles.

The breeze at this meeting was reaching up to 5 knots, which was unusual after the last two days. Most skiffs rigged with their number one sets, with Jessie, electing to go with a smaller rig for the breeze which was to come. Eleven skiffs made it to the start line and were away at 1017 in a clean start.

While Truant II, Wrecker, Miss Marlene and Irene-M went high on Bulimba Point in order to catch the breeze when it came around the point. Ramona II, however, tacked onto port just after crossing the line and seem to find a private puff and was making good progress to the first mark. This position dropped off when the breeze filled in around the point reaching a huge 5 knots. The boats which headed to the point now came back into it in the race for the mark.

First around was Uncle Fred, skippered by Eric Partland with 5 times champion Graham Hams in the bow, followed by Wrecker and Miss Marlene. The Queensland boats were buried back in the pack with Avro eighth, Truant II ninth and Jessie eleventh.

Uncle Fred two-sailed down the shore before setting a flat kite while Wrecker went straight for the middle, set her kite and roared into the lead. Miss Marlene set her kite on the shore and was happy to gybe back and forth keeping close to the Bulimba shore. With Irene-M, Truant III and Ramona II following the middle track, this left Merle, Avro, Jan, Truant II and Jessie in the doldrums.

This was when everything changed again, the Nor-wester began to fill in behind the back markers who carried it with their spinnakers down to the leading group seeing places change everywhere but in the top three. First around the bottom was Wrecker followed by Truant III, with Uncle Fred in third place.  Around the bottom mark was also where the gremlins struck the fleet. Avro, working his way through the fleet, was hit by a willy-willy which spun them around, narrowly missing a capsize by the sheethand (Bruce) shifting his weight rapidly. Actually he went over the stern and held onto the tuck, this had the intended effect of standing Avro up and allowed them to haul in their quick thinking sheethand.

Irene-M wasn’t to be quite as fortunate when it hit them. Sheets were thrown but the jib still filled and down they went to experience the pleasures (?) of the Brisbane River mud. From here everyone held on until the Bulimba Point where the vagaries of the breeze came into play again. The margins across the line in 5 of the finishes were less than one minute. Pretty close racing.