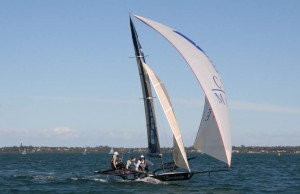 Firstly, congratulations to Laurie on a brilliant job in starting this blog. It has documented the fun and games of learning to sail a winged 18. Laurie has since moved on and Queenslander, one of Brisbane’s two winged boats has sat dormant in the sheds for a season along with his blog … until now.

On Trophy Night 2009 Paul Christofis had the genius idea to dust off Queenslander and find a couple of other fools who were brave stupid enough to learn how to sail it with him. Why not? How hard can it be?

Michael Thornton agreed to be for’ard hand. He (fortunately for us) has a ton of experience in sailing these winged monsters. I just happened to be walking to the bar when Paul saw me and thought I looked stupid enough to drive the thing.

Darryl Dignam kindly put in the hard work to prepare the boat for racing and took us on our first training session last weekend. We joined the DPSS along with our own rescue boat. First Darryl skippered to show Paul and Michael the ropes. Then I jumped on and all Hell broke loose. One of the simplest sailing techniques, tacking,  seemed to elude us (me). 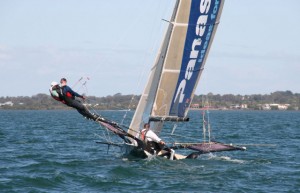 Sailing Techniques to Forget No. 1

Darryl did his best to prepare us before leaving the clubhouse. Strangely every sentence ended with “or you’ll end up in the drink”.

Sailing is often described as “Standing in a cold shower tearing up $100 bills”. I’d describe our first session on the Winged 18 as “Doing squats for two hours on the back of a galloping horse, which for no apparent reason, dives into every river it crosses and rolls around.”

We finally managed a few successful tacks, but now weary from all the swimming and flailing about we had another series of capsizes, a short session in irons and much shouting and swearing. We decided to head for home.

Sailing into a beautiful sunset we began our debrief – what went wrong, what went right, etc. All Michael could manage to say to me was, “You’ve got snot on your ear”. We still don’t know who’s is was. Then we ran aground.