The BOM said 20-25 knots all afternoon with a S.E. change. Seabreeze said 15 knots early, down to 5 and back up to 20 in the afternoon. This guy predicted a ‘super storm’, and the end-of-days, and every other weather report said something different.

4 boats turned up to battle it out for the first 2 heats of the QLD championships, but before we could get the boats off the trailers, the ‘end-of-days’ came over the hill and smashed the Bay Area with 50-70 knot winds with lighting strikes in every direction. Boats were pushed across the grass on their trailers and a friend of the club told us she was trapped in Spotlight due to flash flooding.

The storm passed as quickly as it came and we rigged small rigs in a 25 knot easterly. When it came time to hit the water, the breeze had dropped to a cloudless 5-10 knots and there it stayed ALL AFTERNOON. Where were you on THAT ONE Jenny?

Winning Appliances, APC Logistics and BlueWave made it to the delayed start in time with Ben’s Boat (insert sponsor here) arriving a little late with some new-boat-teething-issues. The race was chocka-block with shoulder to shoulder action, spectacular crashes and broken carbon fibre body parts galore. No wait, that was F1 racing last night, still, thankfully we have a marine maintenance parts supply that’s extremely reliable.

The race was actually a tad pedestrian with fluky wind and small rigs. Shane Smith led the race on Winning Appliances with APC and BlueWave second and third followed by InsertSponsorHere. Laurie (APC) did well to keep pace with Shane, but just couldn’t quite catch him while Ben and the boys on InsertSponsorHere had a great day tuning their new boat in the easy conditions.

Race 2 was cancelled due to fading light and another storm building on the horizon and we three stringed it all the way into the marina.

It was a light day and we were underpowered, but at least we weren’t trapped in Spotlight. 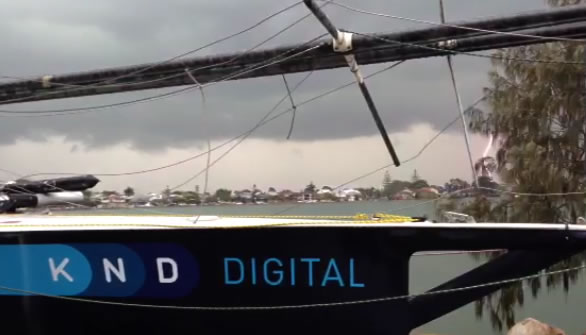