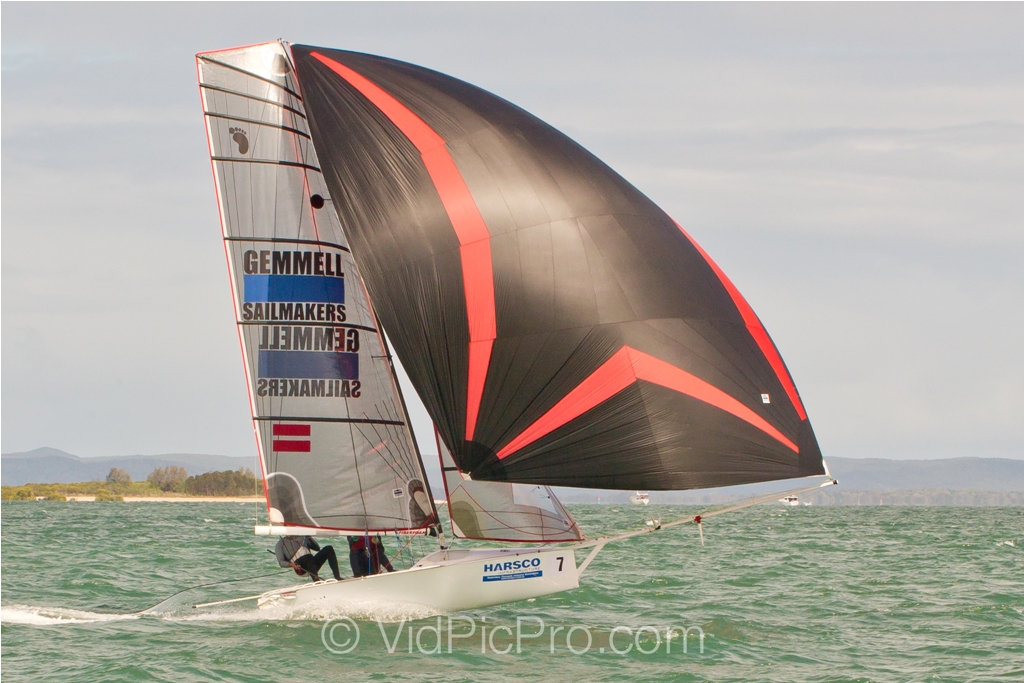 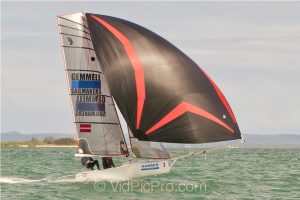 Races 2 and 3 pushed the 12ft skiffies to the limits of their skill and endurance. A 15-20 knot forecast and rain squalls made the rig choice difficult, but most went 2nd and it turned out to the be the right choice, at least for part of the day.

Race 2 was won by Gemmell Sails, 2nd C-tech Performance and 3rd Garde. A rain squall on the way to the start continued as the skiffs battled up the first work. The wind started dying down the first run as the skiffs negotiated the downwind gate and all came together at the dual bottom marks. Gemmell started in front and was never headed, extending to a ~3 minute lead by the finish. Garde and PB Towage had a good battle, with Garde getting the edge. The softening breeze and leftover chop was making things difficult both up and downwind.

Race 3 was won by C-tech/Little Bus, 2nd Gemmell Sails and 3rd C-tech Performance. The breeze settled into a nice 2nd rig and the speed of the racing picked up. The first work and run was extremely close with bunches of boats coming together at the first gate and bottom marks. Plenty of yelling and chaos meant getting a clean line shot you out in front of the pack. Once again, C-tech/Little Bus and Gemmell Sails were inseparable, with only 2 seconds splitting them at the finish, this time with C-tech Performance only 7 seconds adrift. It doesn’t getting tighter than that.! The 12ft skiff spectacle was in full flight with at least 5 big spectator boats crowding the course, getting an eyeful of the best action on Waterloo Bay.

Miners was won by Chris Reid and Ben DeFluiter for a bit of pre start submarine action  and also forgetting to tie the head of the kite to the halyard.

Spinners was won by the local Brisbane favourite, Brad Madders for a bit of time in the clink the night before and waking up in an unknown suburb.

Photos from Races 2 & 3 will be posted on the VidPicPro website shortly. 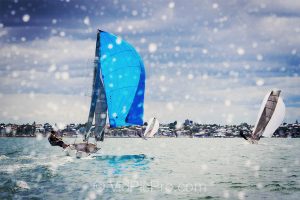