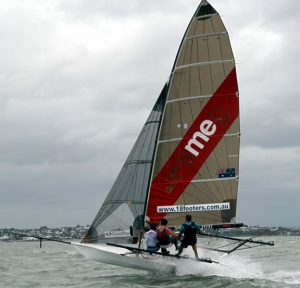 Leaving for the race today took longer than expected. I couldn’t find my car. It had blown away. It was a wild day down at the club and t­he bay was empty except for the white caps and some windsurfers with goofy grins.

The only skiffs game enough to sail were Darryl and the boys on the Classic 18, Argus Venture (formally Argus Tuft) and the Sydney boys with David Witt at the helm. Paul and I decided to go out in the rescue boat and see how it’s done in blow.

Argus did a few manic runs (in true style I might add) before retiring early for fear of the rig snapping like a twig. The winged boat however, was in its element. The guys were around the southerly course in about 45 seconds flat. We tried keeping up in the 60 horsepower rescue boat and didn’t have a hope.

Here are some pictures from the day.

11 years ago Centenary
See All Posts